My Hood To Coast Adventure: Part 2

September 20, 2015
Come Friday, it was RACE DAY! I was about to embark on the journey of a lifetime: tackling the Hood to Coast Relay with Team Nuun! Honestly, I'd barely slept from all the excitement. 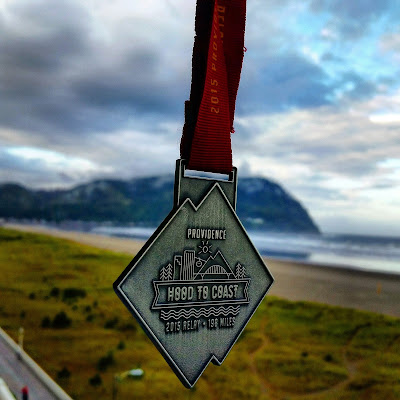 (Click Here for PART ONE of the Adventure with Team Nuun)

I did get more sleep than Van 1 though! They all rolled out really early to head to the Mount Hood starting line. Meanwhile, all those in Van 2 got to sleep in. One nice perk of being in the second van. The downside to being in Van 2, was missing out on the starting line. While I wouldn't have given up my Van and teammates for anything, I do envy those who got to see the stat line for themselves. The Mount Hood scenery was amazing (based on my fellow teammates photos).

While we watched in envy on Instagram and Facebook all the amazing startling line photos, we began the drive to the first exchange. On the road, my van bonded even more. It was a beautiful day and all of our spirits were high.  The adrenaline was flowing and we were having a BLAST! 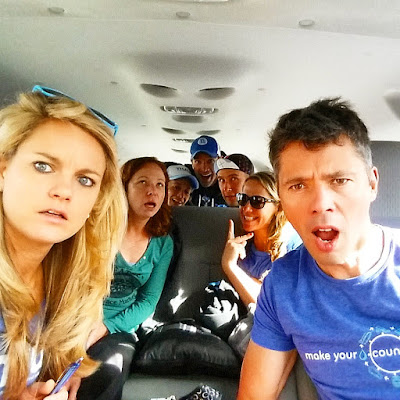 The only “issue” with being in Van 2 is you do a lot of “waiting” for the other Van to wrap up their first leg. While you wait, you see everyone out running, and that’s all you want to do… start running! But I still wouldn’t have changed a thing about my experience.

While we waited for Van 1 to come into the first major van exchange, we met at the Nuun tent to wish Nuun's social media specialist and awesome gal, Emily, a Happy Birthday. How awesome is it that even during the middle of the race, Nuun employees still managed to plan something special for a fellow employee?! 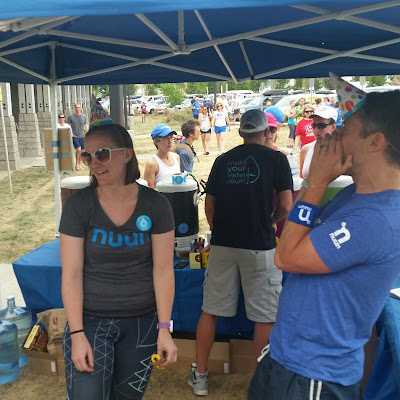 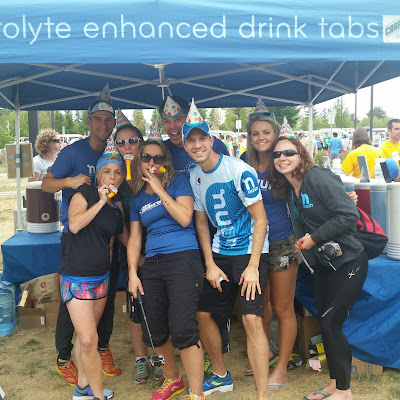 Once Van 1 was back, it was our turn! Our first runner headed out and it was ON! We all felt the rush of hurrying to the next exchange before our runner showed up. There was also the excitement of getting out ahead of them to cheer them on. That’s what Hood to Coast is all about. It's about camaraderie and enjoying the adventure together. And Team Nuun had the same philosophy from the moment we started.


We lucked out on weather that first day. It may have been a little humid, but that was about it. And although my first leg was labeled as “moderate,” it was actually rather flat and I was able to push myself and beat my expected time. In fact, even my second and third leg were listed as “hard” and “very hard,” but I felt the routes themselves were much easier than advertised.

Now, we did hit a snag once I finished my first leg. My team was at the wrong exchange!

But this happens at EVERY relay. We even saw it happen to others at other exchanges, so it’s to be expected. As long as your runner knows to STAY PUT, then you’ll be fine. And that’s exactly what I did. 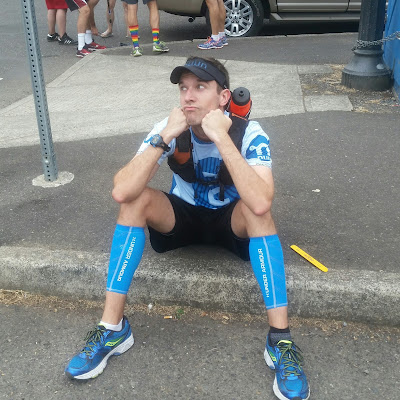 Eventually my team made it to me, and we were back on track. Of course, I had to tease them about it for the rest of the weekend, but that too is just part of the fun. It became the running gag of the weekend and gave us one more thing to laugh over. :-D

One advantage our van did have over the other van was the last runner of our group got to run over the bridge into Portland. Our van driver/Nuun CEO, Kevin, even ran with her to get out and stretch his legs and experience a little of the excitement himself! After that, we grabbed dinner at a local brewery.
By the time we began our second legs, the storm had already started. Some of us dealt with a light drizzle, others a downpour! Nevertheless, my second leg was my favorite, because it was a nighttime run with trees all around on a dirt road with the smell of fresh rain in the air. But shortly after that, my fellow teammates had to deal with running in monsoon-like showers. Still, it never dampened our spirits. 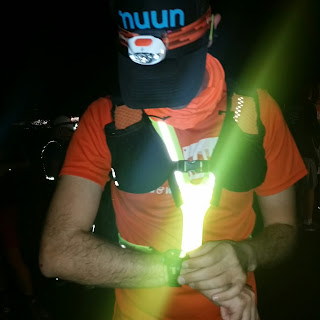 As the night and early morning hours progressed, traffic became an issue — and it would remain so for the rest of the race. This is the one problem popular relays have; but we didn’t have to deal with the traffic issue until late in the relay, and that was a small win for us. After a somewhat challenging second leg, it was time for dry clothes and a well-deserved cat nap! One of the most difficult things about any relay is lack of sleep. It’s tough to get more than 45 minutes worth of sleep at a time.

When we got to our third and final leg, the storm had turned to mostly WIND! I’m talking crazy wind. Trees crashed. Limbs fell all around us. I think some teams even called it quits, but Team Nuun kept pushing! My third and final leg was definitely rough. The wind kicked my feet out from under me more than once.

I was struggling fatigue, this was my final leg and of course my longest one too. But remember when I told you that this adventure was all about camaraderie and cheering on your fellow teammates? My van pulled off to the side of the road for me not once but twice, to cheer me on and even give me a little "hand tunnel" to run under. That honestly helped keep my spirits high and push a little farther. It just goes to show you the power friends and family can have! 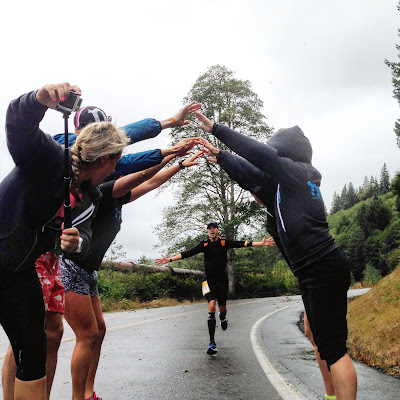 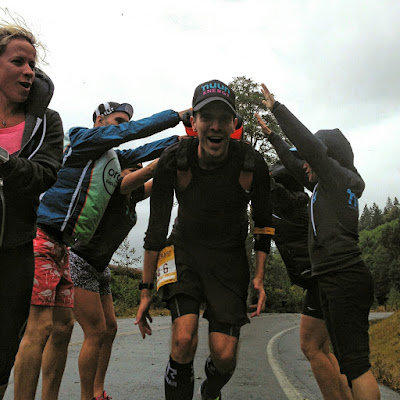 I pushed onward and finished my final leg. And our team got to the finish, only to realize the finish line festivities were cancelled due to the bad weather. There was still a finish, but it wasn’t the beach-side finish everyone had hoped for or wanted. Nonetheless, we had completed our mission: 200ish miles as a team! 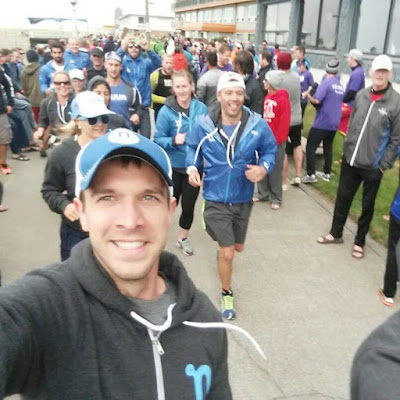 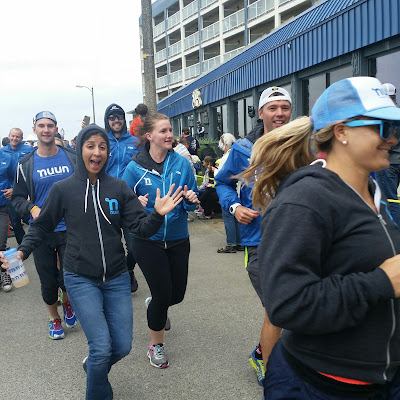 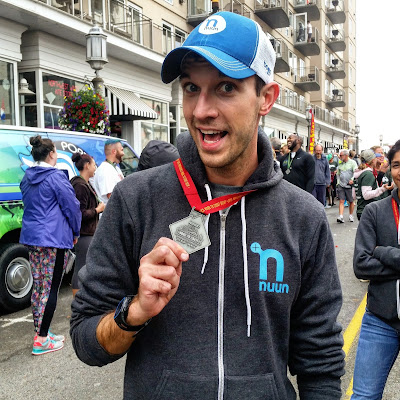 People have asked me, “What’s your favorite part of the race?” Honestly, that moment when we’re sharing drinks and laughs over inside stories or funny moments from the vans. That’s the moment that I cherish the most. Those are hard-earned stories. Those are memories we’ll have forever. 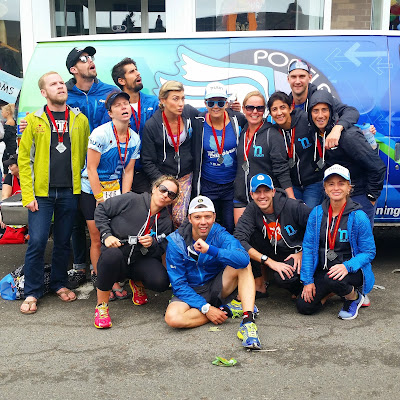 Even though the weather made it challenging, the race was much more a triumph when we finished. I can’t thank Nuun enough for this unforgettable adventure. Honestly, I was a little sad and depressed when it was time to leave. We'd had such an incredible time, I didn't want it to end. I did have comfort in the fact that, although this leg of the journey may be over, I have now have new friendships and memories that will last a lifetime.
Hood To Coast Nuun Race Reviews Relay Team Nuun