December 29, 2013
Knocked out 16 Miles today! How did it go?  Well, I finished it.. that's saying something!
The weather was amazing! (70 degrees and sunny in the winter time, that's why people move here to the desert!)  I felt great overall, my leg muscles were really fatigued though.  But that happens from time to time, especially when training, so I'm not too worried.  It was slow but I got the mileage in and that's all that counts right now!
While running I thought about all the questions a lot of non-running friends and family ask me... as well as some beginning-runner friends.  I thought I would take the time to address some of those now.  So in honor of my 16 miles I picked 16 of the most common questions I get asked!

1.) What do you eat before a run?
I don't have a set thing that I eat before my run.  But I try to eat a little something before I head out the door.  Something that will fill me up but also healthy that can fuel my run better.  Today I had a homemade granola bar, a banana, some Greek Gods Yogurt, and Nuun (an electrolyte drink... think gatorade tablet but less sugary). 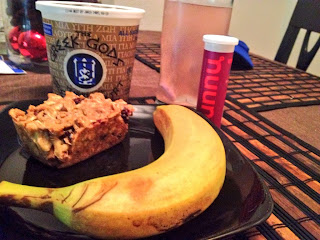 Now, I know a lot of runners that don't eat anything before they go run.  The "grab your stuff and go" kinda runners.  That's absolutely fine, it's all about personal preference.  I prefer to eat before hand because I love to eat.  And on my runs I typically spend the whole time thinking about what I'm gunna eat when I'm done. LOL.

2.) Do you drink coffee before you run?
I typically do drink coffee before a run.  I'm a caffeine addict and need my fix or else I'd be yelling at cars from the sidewalk as I ran.  But I don't all the time, and on days like today where I skipped the cup of joe, I'm actually grateful.  The caffeine, although awesome, will only leave your body thirstier, AND... it's going to make you poop.  It's a universal truth.  The sky is blue, the grass is green.. and Coffee will make you poop.  So I try to steer clear of the coffee before a long run where there are no bathrooms and I'll be away from home for quite some time.

3.) What do you wear?
Shorts and a shirt.  I always dress for about 10-15 degrees warmer than it actually is.  When you're out running you're going to get warm fast.  So even though there was a chilly breeze today, a tank top and shorts were still in order. 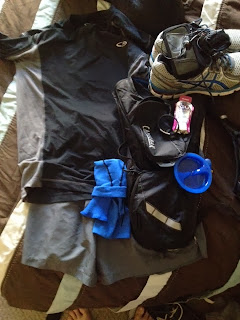 4.) How much water do you take with you?
It depends on a lot of factors, the distance, the route, the weather... Today I was running where there were no water stops along my route, and going for 16 miles so I needed to be safe and have a good amount of water on me.  So I ran with a light camelbak.  It holds about 70fl.  On smaller runs or on routes where there are places I can fill up.. I'll take just a small water bottle with a strap or a fuel belt.

5.) Do you eat on the run?
Yes, but no.  I don't pull out a small pizza on the fly, (although sometimes I wish I could)  but I do fuel up throughout my run as needed. I run with GU Energy Gel or sports beans.  Your glycogen storage gets deplete on long runs and you gotta refuel them or end up stumbling around at the end.

6.) What about chaffing/blisters/ect?
Chaffing is a big issue for guys.  I actually use either vasaline, or "Body Glide".  Vasaline is the cheaper option, but Body Glide is less messy.  I'll also use gold bond powder in my shorts to keep things dry, and in my socks.  By keeping my feet dry it helps to prevent blisters.  Vasline/Body Glide on the nipples helps to prevent bloody nips... or I sometimes cut off the tips of a band aid and where them like pasties. Looks silly but if you're running with a shirt no one will see and anything beats bloody nipples! 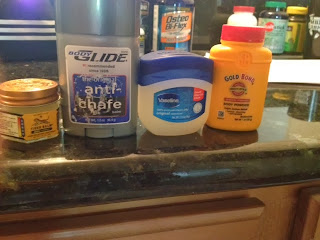 7.) Don't you get bored running that far?
I like to run with music, it helps my mind to wander and pass the time.  I just run with an armband and headphones and take my iPhone with me.  Also helps if I needed to make an emergency call, ect.

8.) How do you know how far to go?
Sine I run with my iPhone I use the Run Keeper app (there's plenty of others like Map My Run, ect) and use the GPS to track how many miles I've gone.  It also tells me my speed, splits, ect.  Cheaper than a Garmin and works just as well.

9. ) How fast do you run your long runs?
It all depends.  If I'm feeling good I'll push it but not too fast.  And it depends on what time I'm hoping to achieve at my upcoming race.  Typically longer runs are done SLOWER than your goal race pace though.  But on days like today where I was pretty fatigued, I just focused on getting the miles in and not on the speed.  Sometimes NOT focusing on the time is liberating in itself.

10.) Why don't you just run on the treadmill?
Treadmills are great for speed work, but ever spent two hours on a treadmill? Me neither... it gets too boring! When there's so many other things to see when running in the outdoors there's just no sense in it.
Also, if your race is out on the pavement, it's a smart idea to log most of your miles on actual pavement.  A treadmill just won't give you the same results as the real deal.


11.) Do compression sleeves even help?
Compression gear is highly debated.  Some swear by them, some swear them off.  I love them and feel they really help my sore calves, help circulation, and help keep the blood flowing when my muscles are tired.  If you've never tried em, I suggest giving them a shot! But go for the sleeves first.  they're cheaper and easier to get used than the socks.

12.) Don't your feet start hurting?
Yeah, a little.  After so many miles and if I haven't done any really long runs in a while they can start to feel sore, but if it's just an achy sore I will push through it.  That's what running is all about... pushing your body to it's limits!

13.) Do you get the "runner's high"?
Sometimes I do, sometimes I don't.  Typically if I've been training hard for a while I actually won't get the "runner's high" at all.  But once you get to a point where you're really pushing your body, then you'll most likely experience it.  But I wouldn't call it "high" that so many people think it is.  It's more like just having three cups of coffee. You're alert, feeling energetic, and ready to take on the world!

14.) What do you eat after you're done running that far?
As with breakfast, I don't always eat the same set meal.  But I try to get plenty of protein, some carbs, and usually a banana.  A protein shake is a good idea, the banana has potassium so that's key in muscle recovery and to help soreness.  Today I also had some chocolate milk... that helps curb any "sweet" cravings and the calcium is always good.

15.) Do you use a training plan?
Yes.  I use running coach Bart Yasso's intermediate marathon plan.  Click HERE for a link to his plan. 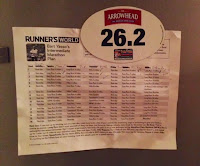 Eventually I'll upgrade to the "advanced" but it's a good plan for me for now.  Now, there are plenty of times where life gets in the way and plans have to be tweaked slightly (I'll skip today, run tomorrow.. do my long run sunday instead of sat.. ect) that's to be expected.  They're more like guidelines.

16.) Why don't you run longer than 26... wouldn't that be better?
Training plans typically don't have you do a long run more than 20-22 miles for a reason.  Those kind of runs really take a toll on your body.  A full marathon even more so.  That being said, your body needs time to recover from each grueling run... doing a full marathon or more before then racing that distance will really wear you out and you won't be on your A-Game come race day.  Plus, more importantly, you're more likely to get injured that way too.  Now, all that being said, there are PLENTY of ultra-marathoners out there that run TWICE that distance on their long runs... but they've been running for quite some time.  It's a slow process, but I hope to eventually reach those kind of distances myself.. but you have to give your body time.

Well hopefully you made it through this long post! If you have any other questions about my routine, my runs, ect.. ask away!  Thanks for reading and Happy Running! 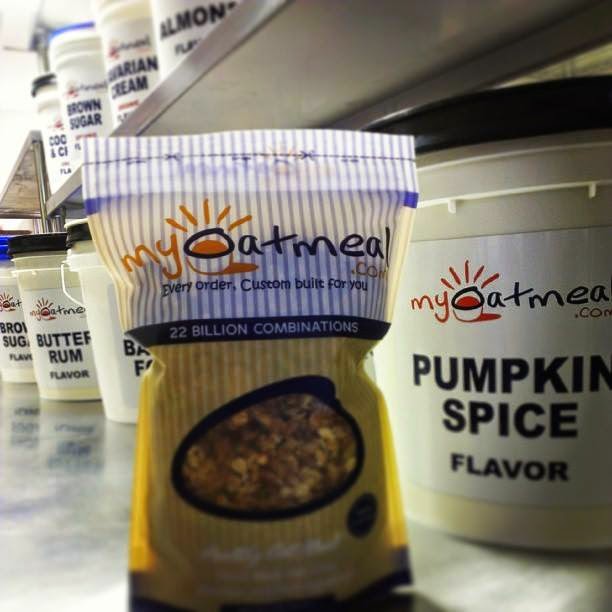