August 27, 2018
I returned to the Spartan Beast in Colorado Rockies (Breckenridge) for another round of torture... I mean fun! :) Last year, was a blast. So my friends and I decided to give it another go. This year was definitely had different results! 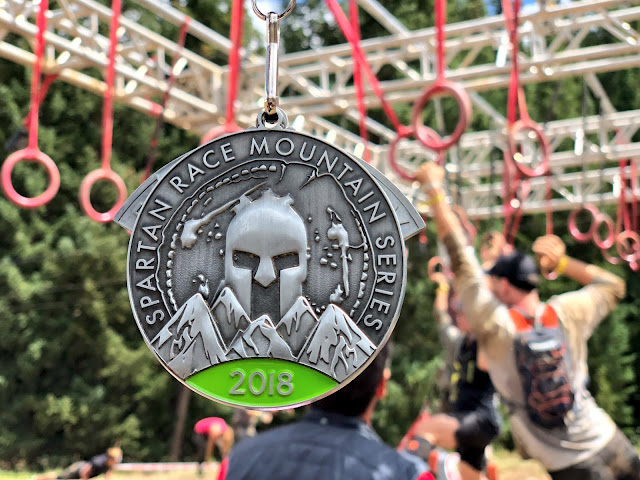 The Spartan Breckenridge venue is one of my favorites. The mountains are beautiful and the weather (usually) fantastic. This time around, we unfortunately had some rain. But that didn't stop us from doing our best!

We got an Airbnb for the 6-7 of us friends doing the event. I highly recommend reserving yours EARLY if that's your plan. Prices tend to go up fast and places book months in advance. Our place was fantastic and not too far from the start. Walking distance at least when we didn't have to run. Haha. 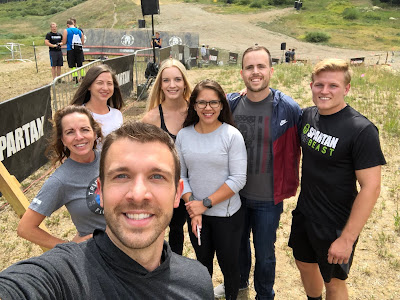 We got in on Thursday evening and had all day Friday to explore and enjoy the festival. There were a few concerns from officials because of possible lightning, but the weather was pleasant and after waiting it out, we were able to move on and check out the area.

We also wanted as much time as possible to get accustomed to the elevation. Spartan Breckenridge starts at about 9,600ft and it only goes UP from there!

Our friends doing the ultra distance were able to pick up their bibs and drop off their gear ahead to save time on race day. It was also pretty cool to see people who had signed up for the open house getting to practice on the rig and some of the other obstacles before race day. 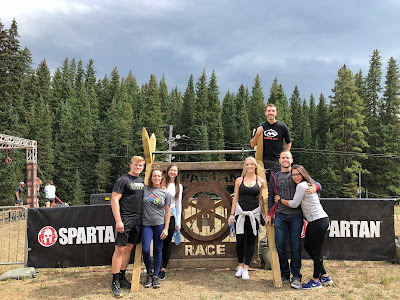 After snapping a few pics, it did start to rain so we took off for a quick dinner and an early bed time. Ultras started early. Then the rest of us were doing Age Group at the Beast so we weren't too far behind.

We decided to do the shuttle to the start, which meant leaving a little early. The Shuttle parking lot was FREE, so that was pretty nice. And not too far away. We didn't have to wait long for the shuttle either and there was plenty of parking when we arrived. 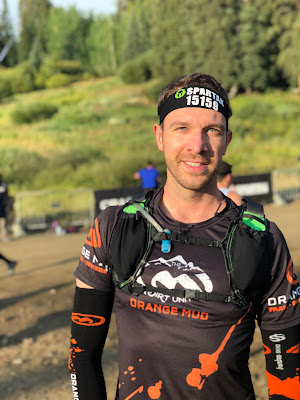 Packet pick-up was a breeze, which left me plenty of time for a few nervous trips to the porta-potty! 😬 I was a little in my head about this race because I knew it was forecasted to rain... and b/c I hadn't worked on my strength training as much as I had wanted to. So I had NO idea how it was going to go.

The weather when I started was pretty nice. Chilly. A little overcast. Perfect running weather really. So I was hoping to get as far into the course as I could before the rain hit.

My Age Group wave started at 8am. Once we took off, as much as I wanted to just go all out I knew I had to take it easy with the elevation. I was already a little light headed from it, but was drinking a lot of water and had taken some Boost Oxygen and some O2 Gold leading up to the start. Anything that could help, right?!

Lots of big hills to start. So many of us were taking it in stride and power hiking the large climbs. Then came the water crossing. I won't sugar-coat it. The water crossing isn't my favorite. But at least it's not a SWIM. I was able to keep everything from my upper chest down dry. (until later... but I'll get to that). 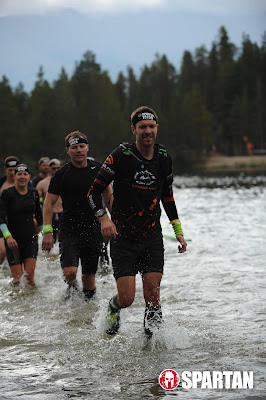 The water was freezing, but at least it was a nice relief for my already aching calves and quads. The year before it was quite pleasant actually by the time we started running again. This year it was overcast so the sun wasn't there to dry us off as fast. But I just pushed through it and kept on trucking.

I was about an hour into the race...when the rain hit. The temps seemed to drop even lower and while it wasn't a full-blown storm... it was definitely more than a light shower. I feel like THAT is when the real race began.

The rain didn't stop for the other two hours I was out on the course. It made obstacles more slick. And my hands were constantly cold and numb.. making it hard to grip a lot of things. I missed a few obstacles I was ready to conquer. It definitely wasn't my best race... but it also wasn't my worst. 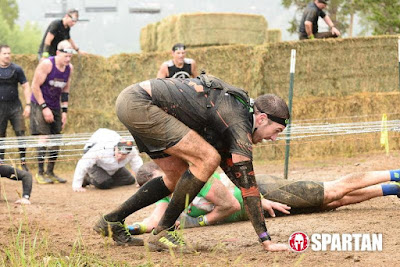 There were a lot of DNF's. Even friends I know who are BEASTS and have done these Spartans for years... ended up calling it in the middle of the race. For a variety of reasons. But trust me when I say, it was no joke out there. We did luck out and there was no lighting or thunder. So they never had to stop the race in the middle. But you could see the misery and defeat on a lot of faces.

Nevertheless, I did still surprise myself overall. I thought the strength was where I may have fallen short. But really it was just grip strength on those super slick bars and walls that were tough. The actual strength obstacles I did well on.

There were two sand bag carries. Plus the bucket carry. And I passed many people taking a breather, resting, some multiple times. While I'm not a big advocate of patting myself on the back... I do at least take pride in the fact that I took those heavy strength obstacles in stride. I didn't stop and just kept moving. Guess my endurance/ultra training had helped with those. All about that "mental toughness"!

Last year I cramped up BAD towards the very end, with only a few obstacles to go. So this year, I made sure I was taking in salt sticks frequently, and staying on top of my liquids. Even with all the rain and not being overheated, I wanted to keep the cramps at bay.

I did end up cramping though... at the VERY end. On the rig. Of all places. Haha. As I was swinging I felt my hamstring curl into a ball. Which I promptly fell off and went and did my burpees. Sucked, but at least it was the second to the last obstacle. So I was able to hobble over to the finish line and take solace in that. 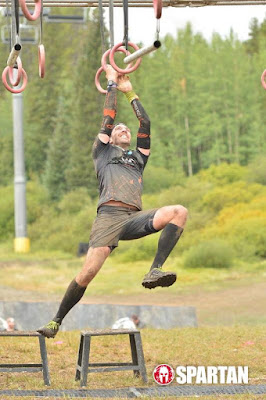 All in all, while the conditions made Spartan Breckenridge this year tough. It was still a great race. You can't beat those views. And when you take a look at the amount of climbing you do overall... you can hold your head high at crossing that finish line.


This particular race left us dirty, bloody, and beaten. But really... that's what these events are all about.  Not about getting hurt, but about pushing yourself outside your comfort zone. It's about completing something you didn't think you were capable of. 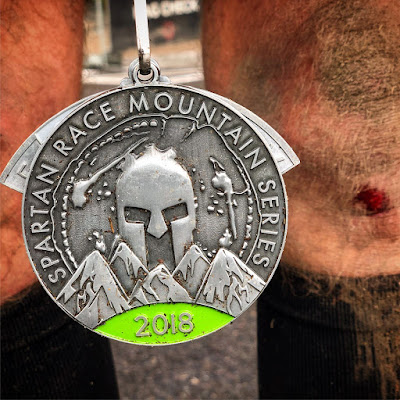 I went into this race nervous I would fail horribly. When I actually finished only 8 minutes slower than last year! AND this year's course was LONGER. So I definitely count that as a win in my book.

After we had all finished, changed, and re-grouped... the rain stopped and the sun came out. It even got a little warm. So really the Elites, Age Group, early Open, and Ultra were the only ones who ended up dealing with the worst of the rain.

There were burgers, brats, and beer. So we loaded up and were content with cheering on people at the rig, and waiting on our Ultra friends to finish.

None of us did the Sprint the following day. Too beaten up and sore. But we did hear great things about it. All in all, Spartan Race Colorado Rockies is a great event. Despite this year's weather, it was a fantastic race and I highly recommend participating! 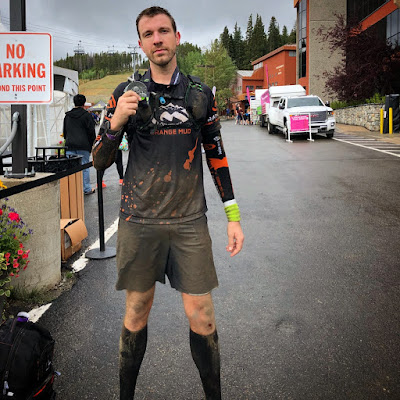 I'm happy I got my Trifecta in for the year. So now I'll be focusing on just running for the rest of the year and early next. Not sure which Spartan will be on my list next. I definitely want to change things up next year. So we'll see where the adventure takes me! 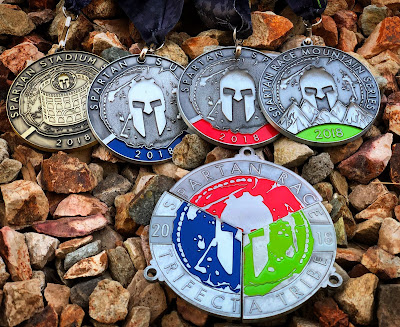