February 29, 2016
Apologies on the delay! But Part 2 of my Double Challenge Turned Triple Threat Weekend was an adventure out on the Arizona Trails. Worth the wait! 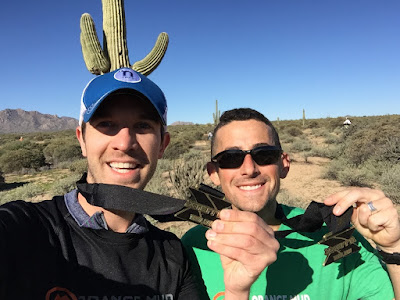 Work has had me tied up but I'm back and sharing part two of my Triple Threat Weekend Adventure. (Read Part 1 Here) My buddy Ryan and I went from the Sedona Marathon on Saturday, straight to packet pickup for the final race in our weekend line-up: The XTERRA AZ Trail Race-McDowell Mountain. 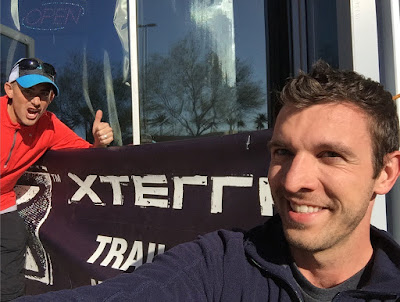 Packet Pick-up was at a local run shop, Road Runner Sports-Tempe. Nothing elaborate, but nice and simple. We both were originally registered for the 15-miler. But we were already pretty exhausted and decided a 7k would be better. Dropping down to the 7k was a breeze. 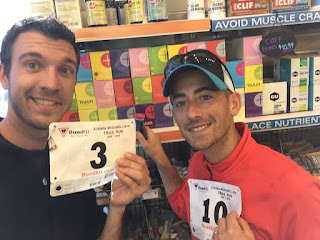 The race shirts are pretty sweet. Each different XTERRA AZ race has a different race shirt (they have a variety of events throughout the year on different trails). They all come in different colors and with a different animal on the logo, depending on the event.

Now, we may have been tired, but we still had time for a little fun at packet pick-up. Ryan had a nice chat with Meb about Nuun Hydration... Meb was indifferent. 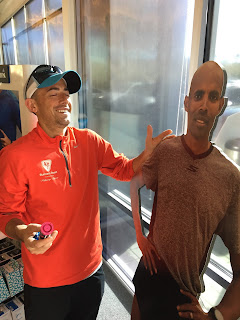 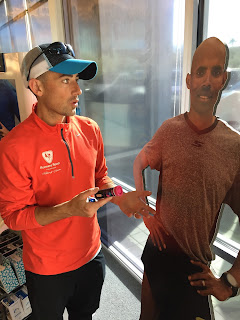 Afterwards, we went for some Pizza and Sangria at one of my favorite local spots, La Grande Orange Pizzeria. 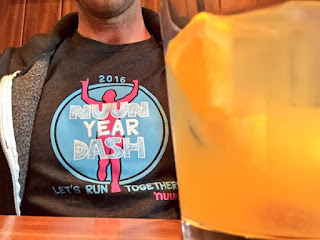 The next morning, we were able to sleep in a bit before the drive out to McDowell Mountain. The XTERRA AZ Trail Race was easy to spot and we even pulled up after the 15-miler had begun. So we got to see the start of that part of the event. 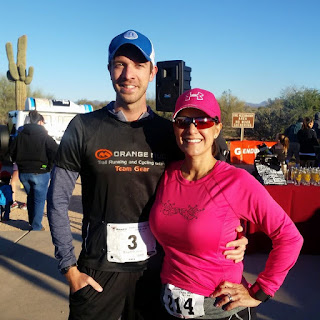 There was plenty of parking and tons of both regular park restrooms and porta potties. I spotted my friend Claudia and we snapped a few fun pics while Ryan went and got a few warm up miles in.

I'm glad I was only doing the 7k because although I wasn't hurting *too* bad, I was definitely stiff!


While we were waiting for the start of the 7k, there was lots of standard water, etc. But also coffee! Not many races that I go to have pre-race coffee for runners! XTERRA AZ Trail Race knows how to treat us. If you didn't want to regular brew of coffee, they also had a great local coffee stand with iced coffee, mochas, etc available for purchase. 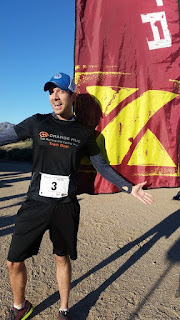 Before we started, Ryan and I spotted a guy we noticed from the previous day's Sedona Half Marathon. We thought we were the only ones crazy enough to do the back-to-back. So I thought to myself, I gotta try to beat this guy!

The start was a little crowded because it's a single-track trail. I had some trouble getting around people that I was slightly faster than. Especially when people started walking some of the hills.

Yes, that's right. There ARE hills. Nothing I'd consider crazy, but you do have some climbs. You're at a McDowell Mountain after all. However, the climbs are wonderful because you have a chance to see some of the amazing scenery around you. The XTERRA AZ-McDowell Mountain 7k is really a beautiful run!

The trail wasn't *super* technical, but there were some spots where I couldn't spend much time looking at the scenery and needed to watch my footing. But that's okay for me personally, because I enjoy technical trails. I feel like I can speed through them faster than most. 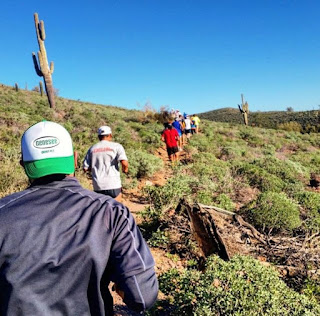 Speaking of speeding through... I ended up going much faster than I thought! For a while the other guy that ran Sedona... the one I said I had to beat... well he was just barely ahead of me for part of the race. Eventually the trail evened out to flat and I moved past him. I pushed SO HARD to beat him.

He was running with music playing from his phone. And I could hear it behind me... letting me know he was still hot on my tail! I pushed past my screaming legs and ended up finishing right in front of him. Gave him a high five and thanked him for pushing me. But beaming knowing that I had pushed myself further than I thought I would and appeased my competitive nature.

There were live streaming results at the finish, which was an awesome bonus. And I noticed the guy I had worked so hard to beat... was Top Male in *my* division! I scoured the results for my name and realized they had me in the 30-34 age group. I thought, oh they must've just put me in the wrong group. But after chatting with the guy in charge of timing, I realized what had happened.

XTERRA puts you in the age group based on your age at the end of the year (so technically the age you will be turning). They do this because as you compete, you wrack up points in your division and can qualify for regionals, nationals, etc. I am turing 30 in a few months. Because of this, I had been bumped up to the next age division. ~womp womp~ 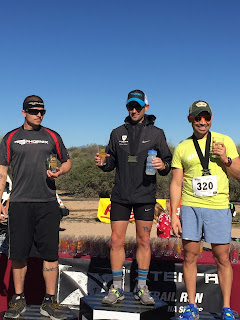 No hard feelings towards the race. I was just a little bummed because I had pushed so hard to beat that guy, it was my last race "in my twenties, *and* because my buddy Ryan *did* place! He won his age division. How cool would it had been if we both had hit the podium that morning? But alas, it was just his victory we celebrated.  But celebrated we did because he kicked some major butt!
The medals for XTERRA AZ are really awesome. Definitely loved this race bling!

Remember how I said that XTERRA AZ Trail Races know how to treat participants? Well, they surprised me again with not only more coffee, but a full *breakfast spread*! We're talking eggs, muffins, the works! The biggest post-race spread I've seen... and for a race with under 1000 participants that's pretty dang awesome. 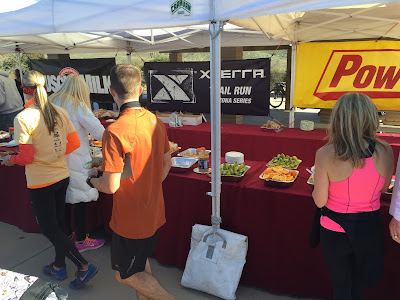 All in all, I'd highly recommend the XTERRA AZ Trail Race Series. Any of them are worth the off-road adventure! Be sure to check out my twitter-bud, Ed's, GoPro video from this awesome race!


It was a very successful, tiring, awesome, amazing, challenging, and kick ass weekend with my buddy Ryan that I won't soon forget. Great races, great two days of fun! Now on to the next big adventure! 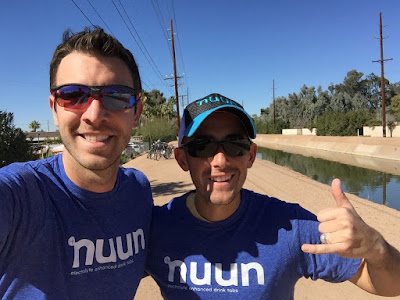