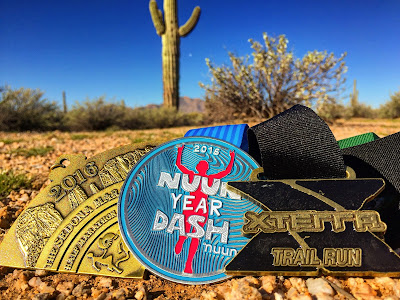 My Double Challenge Weekend Turned into a Triple Threat! First on the list, was the Sedona Half Marathon. Read on for why the Sedona Marathon is easily now my *favorite* half-marathon!


My Team Nuun buddy Ryan came in from Colorado to enjoy a quick and race-filled weekend in Arizona. He and I had ran Hood to Coast together last summer. Ryan had been offered a chance to pace the Sedona Half 1:45 group via his pace team, and my fellow BibRave Pro pals were already running it.. so I said "let's do it!" 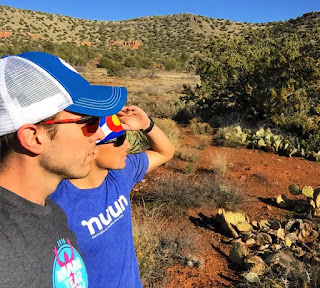 He arrived in town on a redeye Thursday night, and we hit the road after a quick shakeout run Friday morning.
Sedona, Arizona is labeled "the most beautiful place on earth". A pretty strong promise to make. But with breathtaking scenery of mountains and red rock formations and the amazing atmosphere and energy (known as "the vortex"), the small town of Sedona owns up to it! Plus the weather makes it a fantastic place for a weekend getaway anytime of the year. Lots of cities boast their "scenic races", but rarely do they deliver like the Sedona Marathon Events! 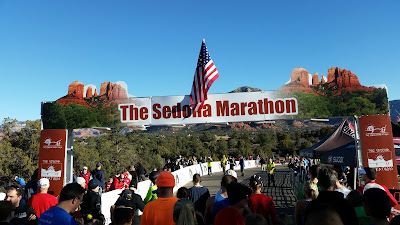 The expo on Friday was small but efficient, with plenty of signage and knowledgeable staff to help with any questions regarding race day logistics, etc. There were plenty of FREE race shuttles, the most I've ever seen for a race! They were being offered from multiple locations, no matter where you were staying. I chatted with a race official regarding shuttles and my hotel location, and he told us that honestly, we should could just drive to the start/finish and park there. Sweet!

We stayed at the Poco Diablo Resort, one of the host hotels. I've stayed at this one before during a weekend in Sedona and loved it. VERY dog-friendly (when you tell them you have dogs, there are special goodie bags awaiting your pups in the room). The Poco Diablo Resort is not walking distance to start/finish like some of the others, but it was a five minute drive tops. And worth it. They even gave each room of Sedona Marathon runners a $30 food voucher/credit at the resort restaurant! 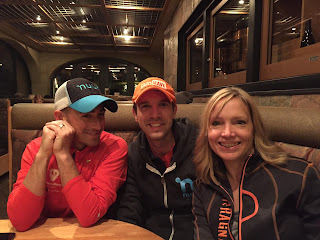 Race Day was on Saturday and I loved the fact that the start/finish was close... and it wasn't until **9am**. No super early 4am alarms and no freakishly early shuttle rides. And sure enough, we pulled right up across the street from the start/finish and scored the best parking space of all time.

There was an abundance of porta potties and hardly ever a line to use them. I will say it was *COLD* to us Arizonans (30+ degrees), but by the time we started the race, it had warmed up considerably. I wore tights and immediately thought I was overdressed once I started running. Long sleeves and shorts would have been perfect. 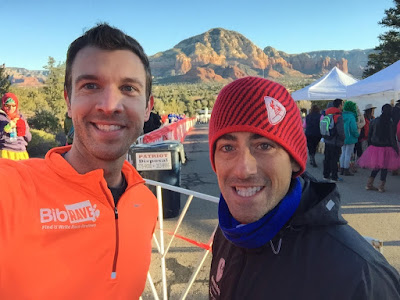 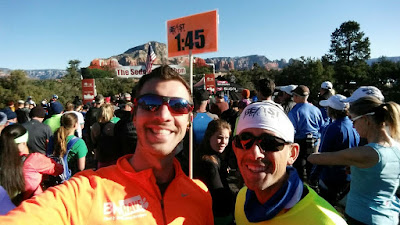 I also ran into fellow BibRave Pro Cassie and got to say hello in between runs to the bathroom, and back to the car for warmth. I also received the chance to meet the Race Director himself! Jeffery Frost was very warm and welcoming and down to earth guy. I thanked him for what I could tell was already going to be a spectacular run!

I was "double-bibbing" during the race and running the #NuunYearDash virtual race alongside my Sedona Half Marathon. Thus my weekend's "triple threat" and triple bling. 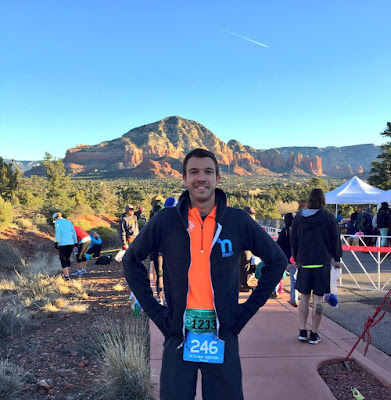 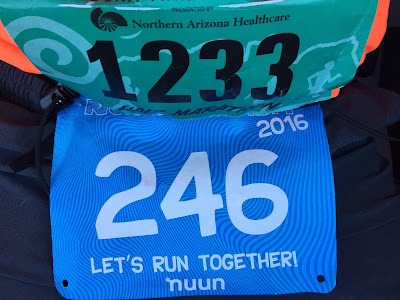 Photos were being snapped EVERYwhere. The start/finish was on top of a hill and perched perfectly with red rocks in the distance. It was an out and back course so all distances (full/half/10k/5k) started and finished there. Each race started 10minutes apart, with the full marathon going first. 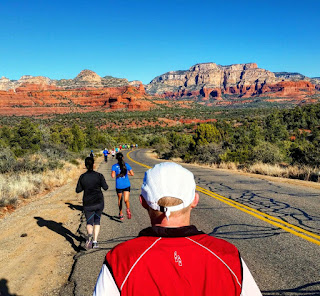 If there is only *one* reason you run this race.. it will be because of the SCENERY! From the start you have red rock formation, mountains, and trees surrounding you. Suffice to say I had my phone out snapping pics at mile one! And I wasn't the only one. ;) It's like this the entire way. No running through neighborhoods or parks...just out and back on the scenic highway with breathtaking views all around. 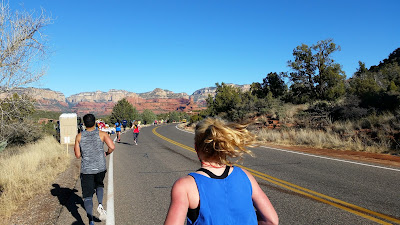 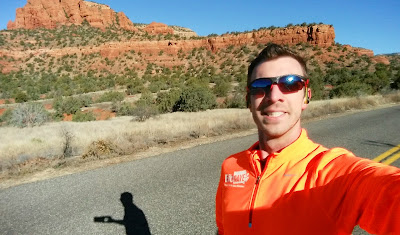 I know Sedona is at 4,500ft elevation, but I never once felt like I was having trouble because of altitude. And I wasn't super trained either for this event. Coming out of injury and lack of training, I figured I'd struggle as a Phoenician runner used to flat and fast... but the elevation must not have been as dramatic as expected. 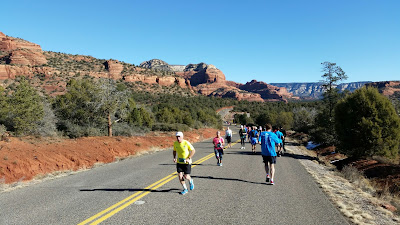 Now, there were definitely HILLS on this course, but more of rolling hills than large inclines. Just enough to slow you down and work those quads. Which, honestly, is perfect for this race. I don't recommend going to Sedona Marathon to PR, I suggest taking in the amazing scenery with your fellow runners. 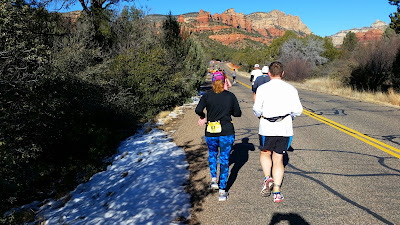 The views had all runners in high spirits. Mind you, I'm a "friendly runner", but as I passed there were people laughing with me, and chatting and having a great time. It made the overall race atmosphere one of the best I've ever experienced. 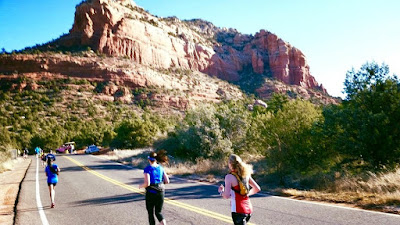 It's an out and back course, so eventually at around mile 6.5 (for the half) you turn around and run back the way you came (uphills become downhills, but also vice versa!). Normally, I'm not a huge fan of this, however, because of the amazing views and positive race atmosphere I actually enjoyed it. I got to see the lead runners and we all were cheering them on as we ran. And when it was my turn to turnaround and head back, I started high-fiving and cheering runners as they were on their way to the turnaround. It was absolutely **fantastic*! I fed off of that energy and pushed it through to the end. 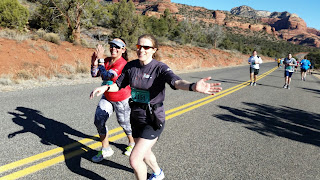 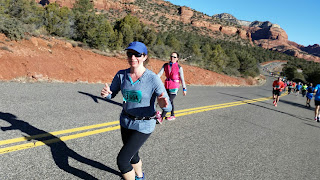 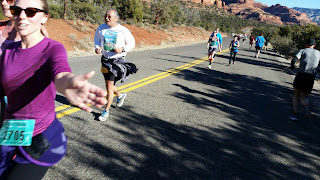 The aide stations were notably some of the best I've seen. Themed costumes, cheering crowds, and not just electrolytes and water.. but bananas, pretzels, cliff shots, etc. These are the same aide stations you hit for the full marathon as well, so I noted that if I ever did the full at Sedona (which even now I'm itching to do), they were well stocked for 26.2! The course was also very well marked for all distances and I never had to think "where do I go".

My only rough patch was the last stretch to the finish. Remember that amazing start line perched on the hill? Well.. it's also the finish line. So... a slight uphill climb to the finish. But at that point I was pumped so I pushed through to get up that hill and earn my bling! 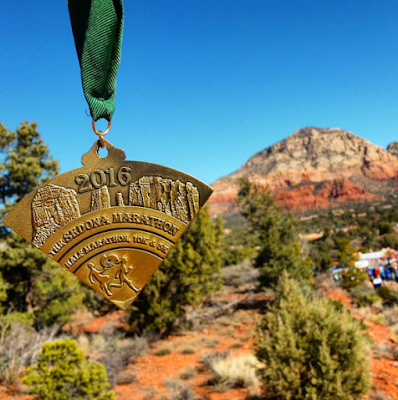 The medal is pretty awesome, and comes designed so if you complete consecutive years, it makes one big medal. The only downside I found to the medal is *all distances* get the same bling. So whether you run the full or the 5k, you get the same medal. My suggestion to the race would be to customize the ribbon so at least there is some separation there.

I also earned my #NuunYearDash virtual race medal twice-over! :) So of course, I snapped a few shots of that one as well. Loved the medal and loved following along my fellow #TeamNuun members' virtual race adventures! 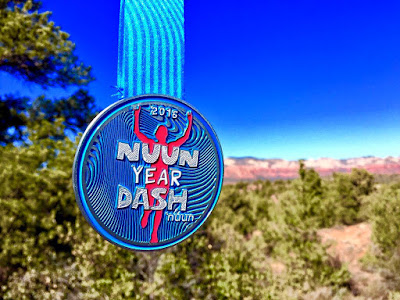 All in all, this race was amazing and I can't recommend it enough. As soon as I returned home I was telling all my friends about my experience and how they would have to sign up for next year! Whether you're an Arizona native or looking for a race-cation destination, make sure to add the Sedona Marathon Events to your list! 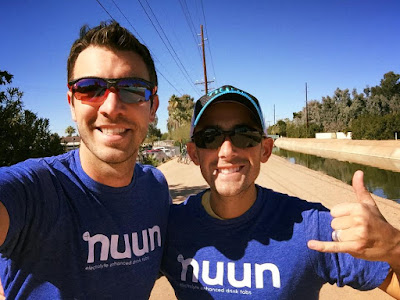 Stay tuned for DAY TWO of our Triple Threat weekend. Next up... we hit the trails at XTERRA AZ!