June 08, 2017
Disclaimer: I received a free entry into the North Olympic Discovery Half Marathon to review as part of being a BibRave Pro. Learn more about becoming a BibRave Pro (ambassador), and check out BibRave.com to review find and write race reviews! 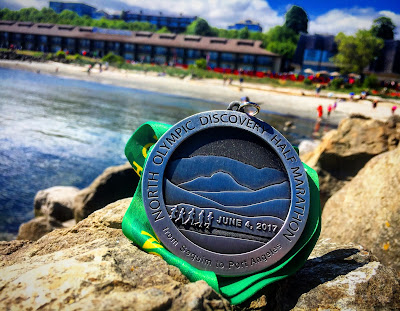 I had an amazing race-cation traveling to Seattle then Port Angeles for the North Olympic Discovery Half Marathon. While I may not have had my best race, Jason sure did! But I'd still recommend this event! First, let me start with our running tour of Seattle. 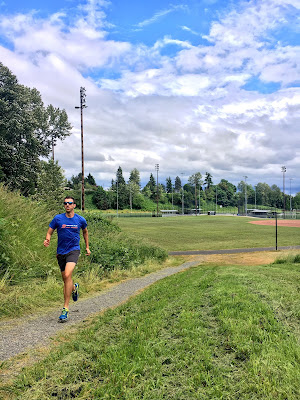 The race was on Sunday, so we took a long weekend and travelled to Seattle first on Thursday. There, we immediately took advantage of the great weather (sunny and in the 60s). Jason and I found a park not far from the airport with not only a great little running path, but also an awesome jungle gym for a little OCR practice. 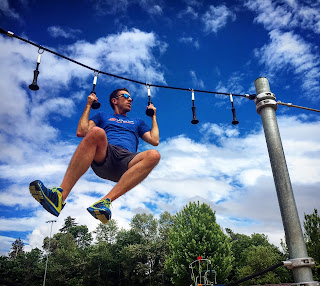 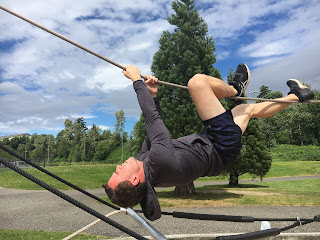 Friday morning, we joined the November Project Seattle crew for an awesome workout at the Lake Union Park. The weather was great, again, and the views were even better. Plus, it's November Project--always a fun time with that crowd. 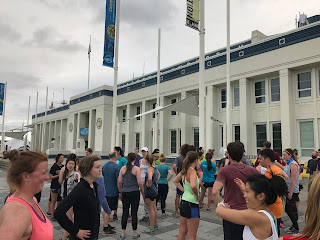 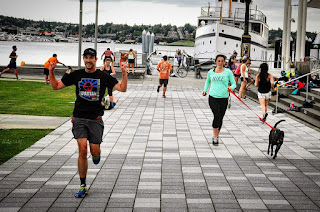 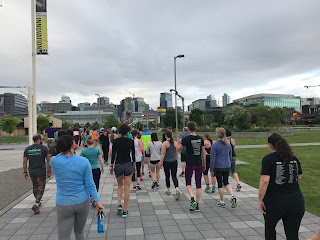 Later that afternoon, we swung by the Nuun Headquarters to catch up with some good friends over a beer (yeah, beer IN THE OFFICE) and meet some new faces. I was sad to have to leave at the end of the day! LOL.
On Saturday, we ran around Gasworks Park, the Wednesday workout location for November Project Seattle. LOVED the running path that led from the park down around the water. Super jealous of their scenic routes! 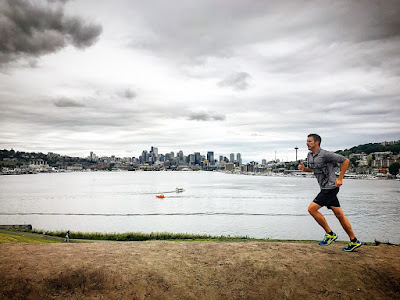 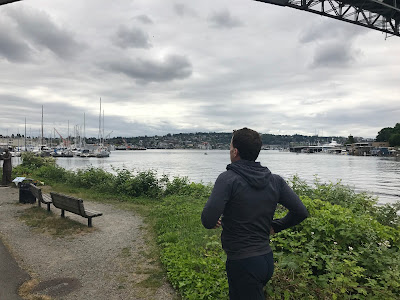 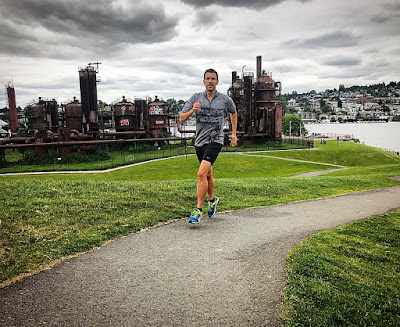 After that, it was time to pack up and head over to Port Angeles. We got to ride a ferry for the first time! Totally unique experience. 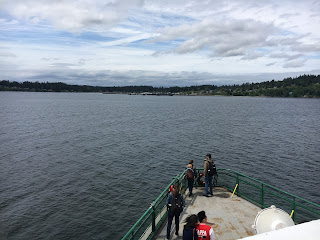 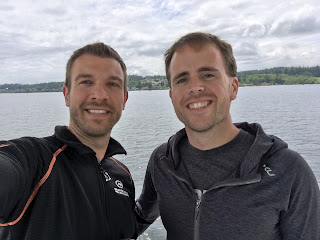 The drive from the ferry to the Port Angeles/Sequim area wasn't too far. It was maybe an hour and half drive tops. And the drive itself was scenic!

Now for the race details. I loved the North Olympic Discovery Half Marathon. Between the amazing views and the swag, I have to say I highly recommend it. Let me break down why.

EXPO
The Expo was small, but easy to park and get around. It was held at the Red Lion Inn, the host hotel. If you were staying at the host hotel it was super convenient! If you live in the area, there were some great deals on some local events.

SHUTTLES
There were FREE shuttles to take you either from the finish line to the start line in the morning, or you could choose to be take a shuttle back to the start area after you finished. So convenient for whatever works best for you. We wanted to be able to leave quickly after the finish, so we opted to be shuttled to the start that morning. The line was long, but the wait wasn't. We got on pretty quickly and the ride to the start wasn't very long either.

RACE START
The Half Marathon Start was located halfway between Sequim and Port Angles, at the Storm King Soccer Fields. It was also a surprisingly scenic start ! They even had a school band there playing for us before we began.

Plenty of porta potties and bag check was quick and simple. 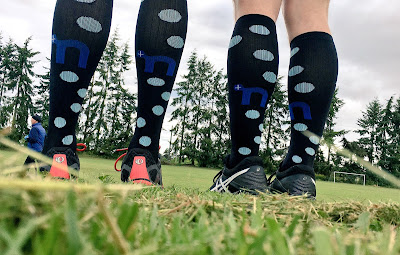 WEATHER
On Race Day, the weather was chilly (for us desert dwellers). Cloudy and low 50's. But by the time we began to line up at the start, the sun came out and warmed it up to a pleasant low 60's. Perfect running weather. 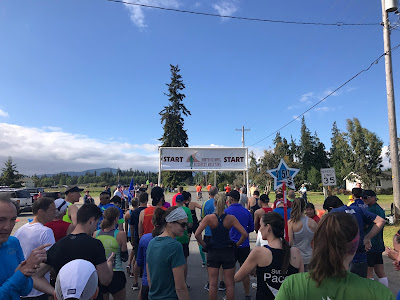 RACE COURSE
Seriously, one of the most amazing scenic courses I've ever ran! Blue skies, mountain backdrop, green trees, and ocean views! All rolled into one.

The course took us along the Olympic Discovery Trail, through the woods and out of any traffic (besides the very beginning). It was like running along a legit trail with wooden bridges and overhanging trees. But don't fret--it's entirely PAVED. :-) 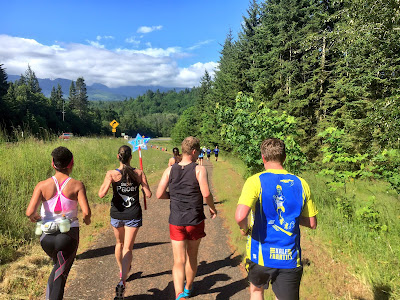 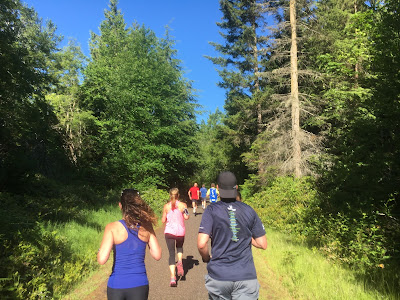 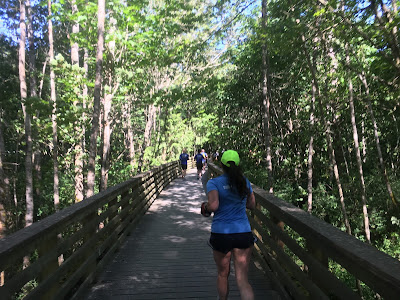 The aid stations were plentiful, and the volunteers enthusiastic. One aid station even had a Pokemon theme and had life-sized cut-outs of all the characters. 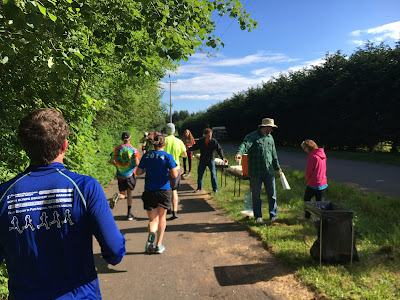 There were a few "mini hills" I would call them. A steep incline that ended almost as soon as it began. But just as many steep declines as well. The elevation was minimal and PR goals totally achievable on this course. Had I been feeling better I totally could have pushed it faster.

Along the last five miles (where I struggled.. but will get to that in a sec).. runners were treated to ocean views along the Strait of Juan de Fuca. Imagine running through a wooded trail, but with a shoreline at your side and ships in the distance. Truly incredible. 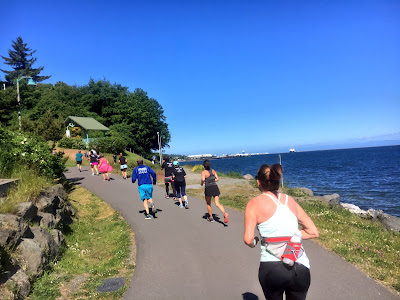 THE FINISH
The North Olympic Discovery Half Marathon finishes at City Pier in downtown Port Angeles. More ocean views! Lots of chances for great pics. There was music, massages, and plenty of post-race snacks.  The wind made things quite chilly (for us) once we finished, so we immediately changed out of our gear into the finisher's shirts--a sweet 1/4 zip! 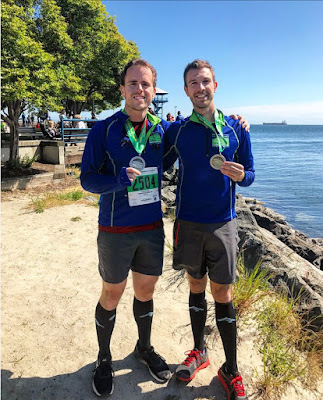 THE SWAG
Did I mention the sweet 1/4 zip? Seriously. It's one of my all time favorites now. The colors are AWESOME, and it's light weight and breathable. Not heavy at all, so perfect for running. Plus, it's even got thumbholes.

The finisher's medal was simple but very elegant and I really liked it as well. Overall... 5 stars on the swag!

MY PERSONAL EXPERIENCE
I didn't have a PR goal in mind, but just wanted to enjoy the race (and at least finish under 2 hours). I was able to do just that, and I'm happy! However, I did run into some stomach troubles along the way.  Not sure if it was something I ate, or just a combination of things, but by that last 5 mile stretch... there were limited porta potties. And when I would come across one, someone would already be in it! So I was forced to slow down and keep things... under control.

I didn't let that ruin my experience though. I loved the event and would totally go back--maybe next time for the FULL Marathon! Jason, however, did PR though, and I'm super proud of him for pushing it.

I highly recommend checking out the North Olympic Discovery Marathon events. And if you have time, be sure to take a tour (or running tour like us!) through all the wonderful parks in the area. There were so many places we didn't get to check out that we'll have to return. 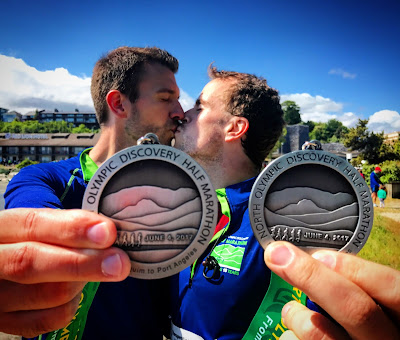