October 23, 2017
The Y Race Phoenix 2017 was my second half marathon in just a week, and even though my legs paid for it, it was a fantastic event! This was my first time running the Y Race Phoenix Half Marathon, 5k, 10k & 1 mile fun run benefiting the YMCA. And I discovered this hidden gem has been around for 49 years. 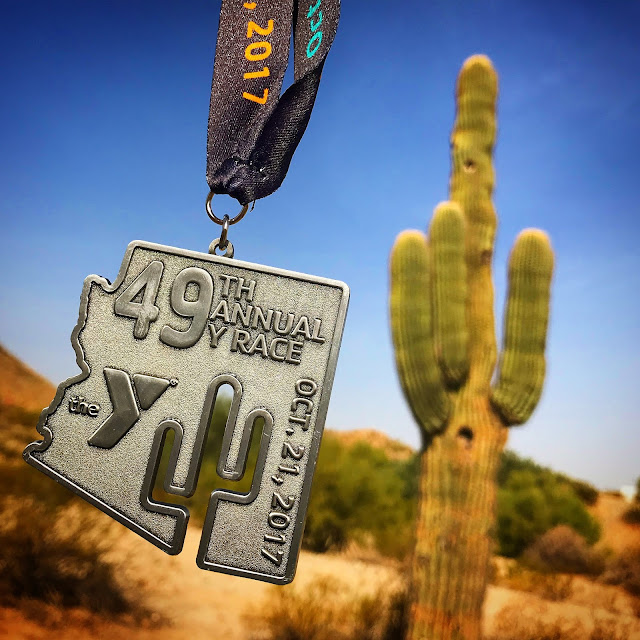 Disclaimer, I received a free entry into the Y Race Phoenix as part of the Raceplace ambassador program, in exchange for my honest review of the event. All thoughts and options are my own.

That's right, exactly one week after the Craft Classic Half (race recap here), I ran the Y Race Phoenix. The Y Race Phoenix has been around for 49 years, and is one of the oldest road races in Arizona! This event benefits the Lincoln Family Downtown YMCA's Annual Support Campaign. These proceeds go directly to militarily families by offering subsidies to members of the armed forces. They provide over $30,000 in membership subsidies a year.

Packet pickup was quick and easy at Runner's Den in central Phoenix. I picked up my bib and tech tee, and made it home for dinner with no problem or issues. 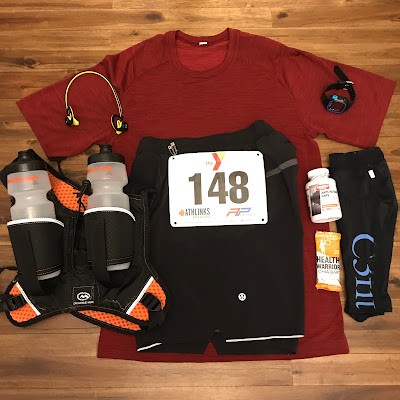 The race started at 7am, but I wanted to go lend a hand at the Raceplace booth so I arrived around 6am. One of the best things about this race was the location. The Y Race Phoenix Half 2017 took place at South Mountain Park, one of my favorite places in the valley to run and train! It's a hilly road, but fantastic for training. 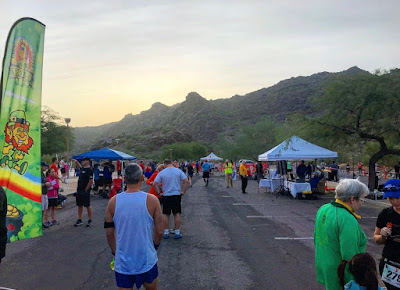 The weather was great (low-mid 60s) and live music, food trucks, booths and more were all present and going strong by the time I arrived. Parking was easy, FREE to all participants, and a stone's throw from the start line. For those familiar with South Mountain Park, the start line was located in the far end of the parking lot to the left of the main entrance.

There were no need for porta potties, as there is a park restroom facility on site already. I used it a few times before getting ready to start. By the time 7am rolled around, the weather had warmed up just slightly... but with overcast sky the race-day weather conditions were perfect. Mid to high 60s at the start. 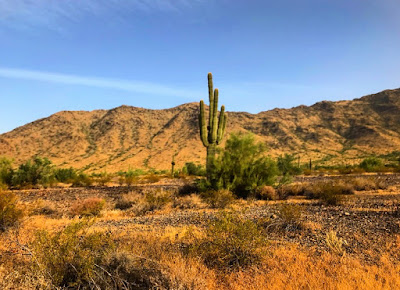 The out-and-back course along the paved road entirely inside South Mountain Regional park takes you along San Juan Road, a route I've ran many a times when preparing for half marathons and full marathons alike. It's extremely scenic--full of desert vegetation and mountain views. There was even a coyote that just casually ran across the road as we started. 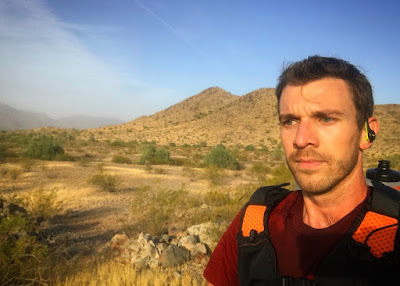 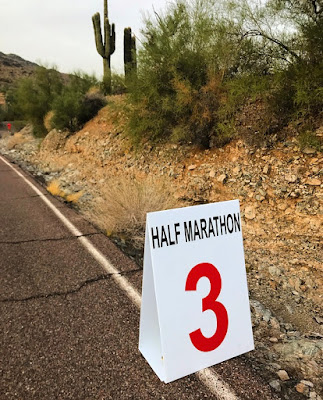 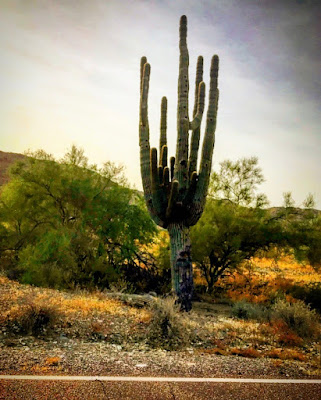 The aide stations were well-stocked and well-manned with cheering young volunteers. And even a scattered porta-potty or two for those occasional bathroom emergencies during the race. 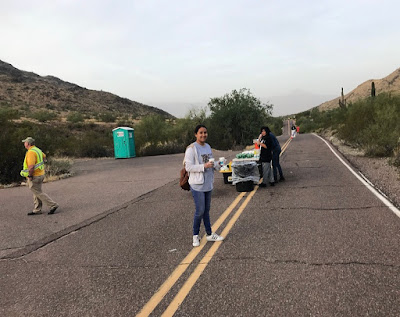 Now, I won't sugar-coat it: this course is hilly! It's why I like to train on this route b/c it gives you a great rolling course to prepare for hilly races. However, this was my first time *racing* on this route. Combined with heavy legs from a tough course just six days before... and it was challenging for sure! Nevertheless, an absolutely beautiful course. 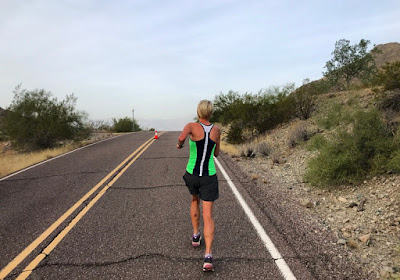 The out-and back meant we turned around at mile 6-ish, then ran back on the opposite side of the road. I never had an issue passing anyone if I needed to. And it was cool seeing all of the lead runners coming through. Some of those guys (and gals) were going so fast on this hilly course I was shocked. 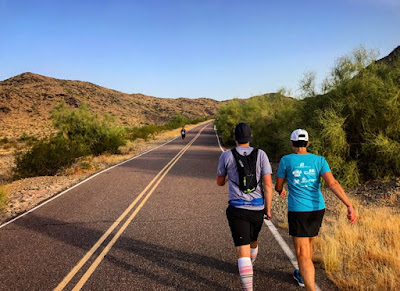 Had I been on fresh legs I imagine I would've been much faster, but I ended up finishing two minutes slower than the previous week's race. However, with little recovery time and ANOTHER race this weekend, I'll still count it as a win. I'm pushing the limits of my body, adding more mileage and challenging myself in new ways. Only two minutes slower is totally a win in my book! 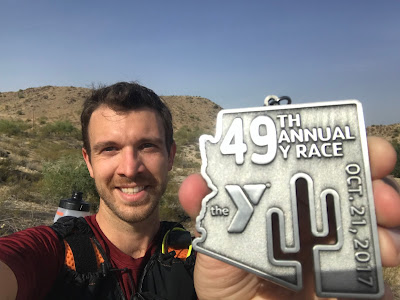 I 100% LOVED the Y Race Phoenix medal! I really like medals that showcase the city and/or state they're located. Makes it feel more unique and personal. This year, the medal was in the shape of Arizona, and had a negative of a cactus. Very very cool!

After the race, I was already sore and tightening up. So I stopped by Balunsd, a new "recovery" studio in Scottsdale. They have everything from compression boots to an ice bath. I "took the plunge" and jumped in the ice bath. It was freezing but just what my sore and achy quads needed! (plus, your first time is free!) 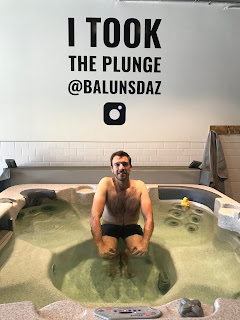 All in all, I'd highly recommend The Y Race Phoenix Half Marathon. It's a great training run for your fall/winter races, or just a fun one for the whole family. There was a 10k, 5k, and 1-mile fun run option, and lots of fun activities for the kids.

I'm definitely adding this one to my calendar for next year. So The Y Race Phoenix, get ready for the big 5-0! I'll be celebrating with you in 2018. :) 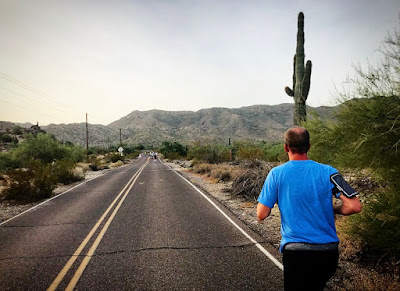