June 09, 2014
PART ONE
My Team and I just finished the Ragnar Trail Relay at Snowmass this past weekend.  It was an amazing adventure!  This was my first trail Ragnar, and it was very different from the regular road Ragnar Relay events.  Should you run the trail versus the road Ragnar Relay?  Is a Ragnar Trail Relay for you?  I'll share my experience and let you decide for yourself!
We all arrived via different routes to the Snowmass village, just outside of Aspen on Thursday.  We stayed at the Westin and they offered a really great deal for Ragnar runners!  Besides a great price, the "Ragnar Trail Perks" package included a catered dinner at the Snowmass Club with a guest speaker!

On the shuttle ride to the dinner, we had the chance for an impromptu Q&A with the Race Director.  He informed us that about 40% of the Ragnar Trail participants in the past have said that they were new to trail running! This surprised me.  I just assumed everyone running was either a trail-running veteran or at least an intermediate trail runner! He said the trails could be tackled by the newbies... but were still going to be a challenge!  He even called some of the trails "lung busters"... and boy was he right!  But I'll get to that soon enough.
The dinner was really great... and full of delicious carbs! :)  The speaker was Adam Chase, Trail Running Ambassador for Salomon, and Trail Editor for Running Times Magazine.  He talked about the Ragnar Trail events and trail running in general.  He also gave some pointers for the newbies in the audience.  One tip, using a secondary light besides your head lamp to limit tunnel-vision.  I'd done this once before and made a note to try it out again on these unfamiliar trails.


After dinner we headed back to our rooms to go over last minute details and put aside all the running gear we'd need for the race.  I wanted to get to the campsites EARLY.  I had heard stories from other Ragnar Trail teams about the campsites filling up fast.  Also, we were told we only had a 17' X 17' space and I'd heard many teams didn't stick to that and was worried we'd be left scrambling for a site.  So we all hit the sack early to get as much rest as possible.

The next morning we grabbed a quick breakfast at the hotel, then set up camp.  We were putting up the tent by 8:30 am and by the time we were done, the sites were indeed filling up.  However, there did still seem to be plenty of room available and I wish I would have slept in a little bit longer.  But I'm glad we got set up with time to spare.
My game plan had been to have one large tent to sleep in, and a smaller tent for gear.  Although that worked well, in hindsight, we could have used an extra tent for sleeping.  Every time someone got up to go run, it ended up waking everyone up.  Many teams had driven and hauled up everything from large canopies to over sized camping chairs! Nonetheless, our campsite would suffice and the views were more than enough to make up for our bare-bones site! 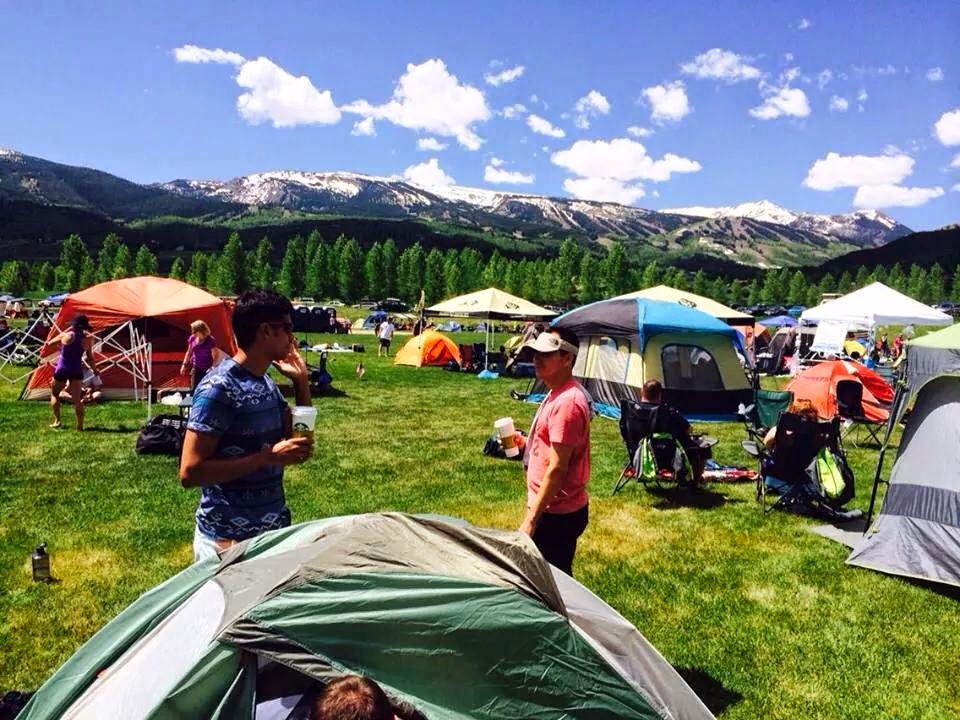 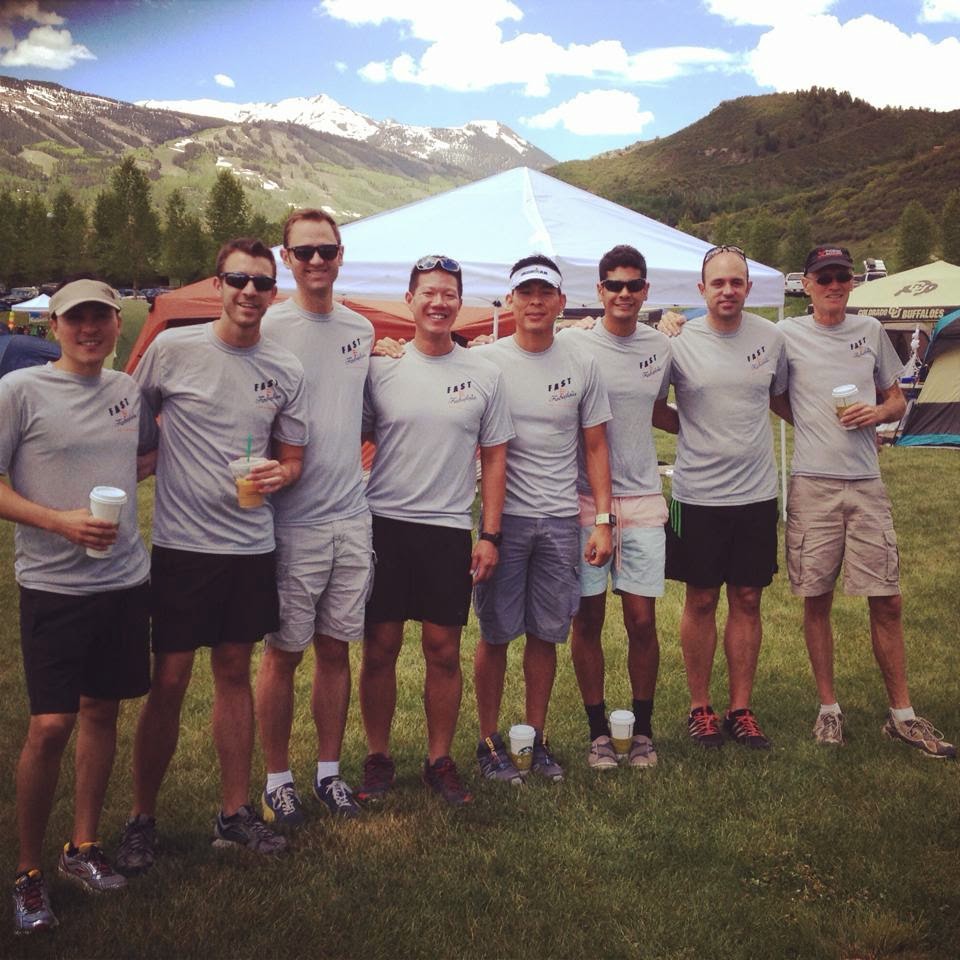 For those unfamiliar with the Ragnar Trail Relay, the course is pretty simple.  There are three loops (Green, Yellow, Red).  Each vary in distance but all start and end at the same place.  The difficulty varies with each loop as well.  But every team member will run each loop by the end of the relay.  Runner 1 starts with Green, Runner 2 starts with Yellow, Runner 3 runs the Red loop, then you start the cycle over again.  Pretty simple and everyone runs a total of about 15 miles by the end. 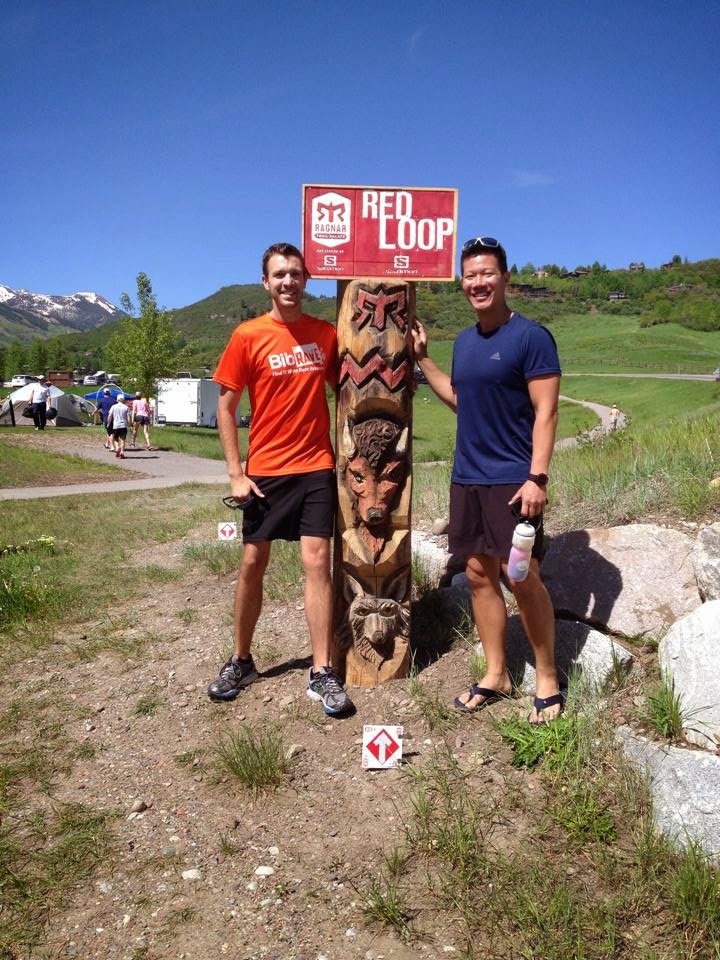 Teams started at noon, but our start time wasn't until the very last wave... at 5pm. They stagger the teams according to their average pace. Slower teams start first, faster teams start last. Apparently we were considered fast! lol. 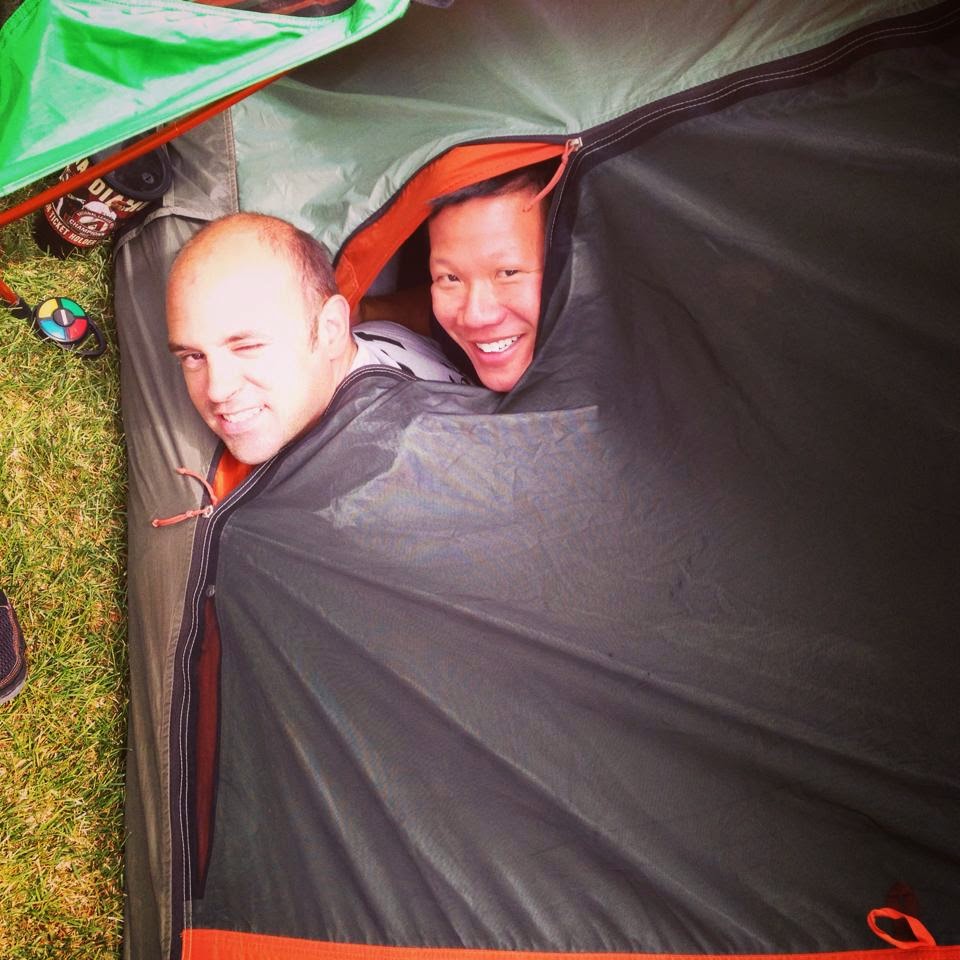 Since we had so much time to spare, we spent it relaxing and basically goofing off.  A lot of other teams brought Frisbees, soccer balls, and their kids.  So there was a lot of activity going on around us.  And of course, there were the merchandise tents.  Lots of goodies from water bottles you may have forgotten, to sweet Ragnar merch!  I splurged and bought a Ragnar jacket that I love!  It was an awesome item that sold like hot cakes. 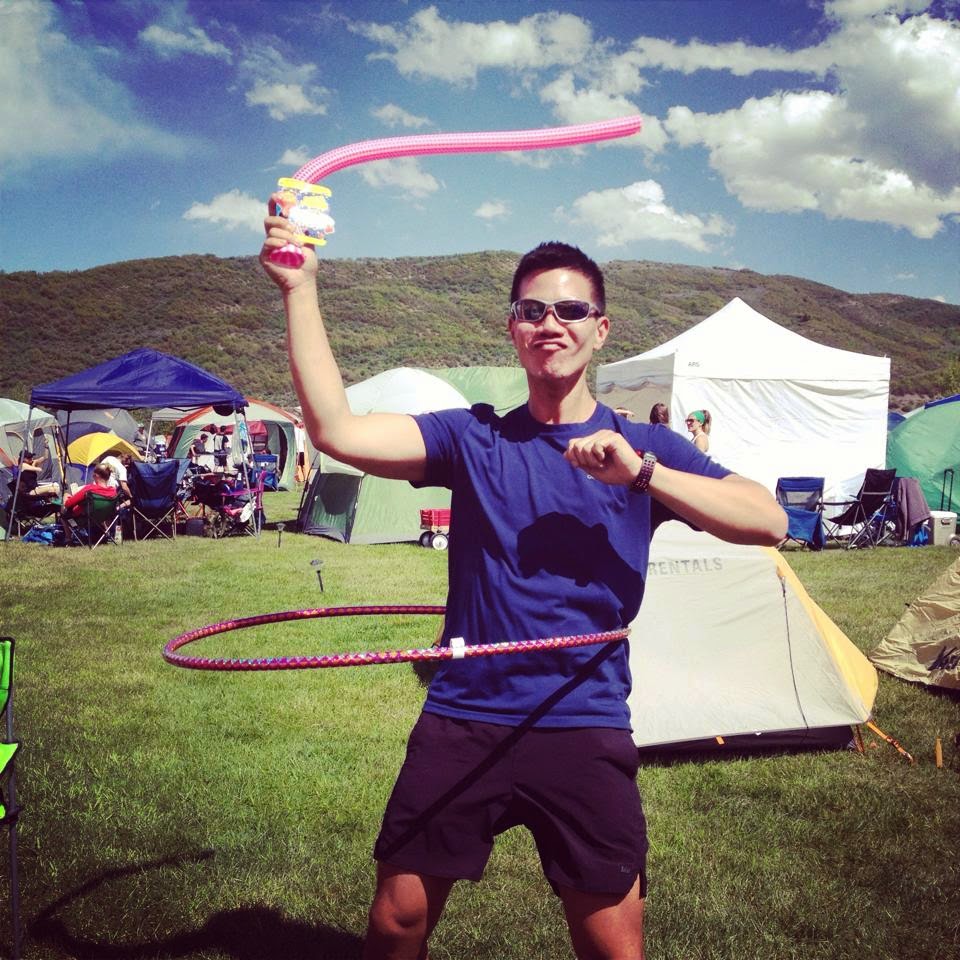 Speaking of hot cakes, lunch was served around noon.  This you had to pay for.  But there were burgers, hot dogs, cookies, even PB&J! It was nice to have food like this available.  Unlike in a regular road Ragnar Relay, where you're living on Clif Bars and GU for 24 hours.  I just bought a PB&J and a cookie though, b/c I didn't want to be too full before my first leg.
As it got closer to our start time, me and a few other team mates were getting antsy and already feeling a little tired.  So we took advantage of the Yoga sessions offered.  It felt great to stretch out, limber up, and all under the awesome scenery! 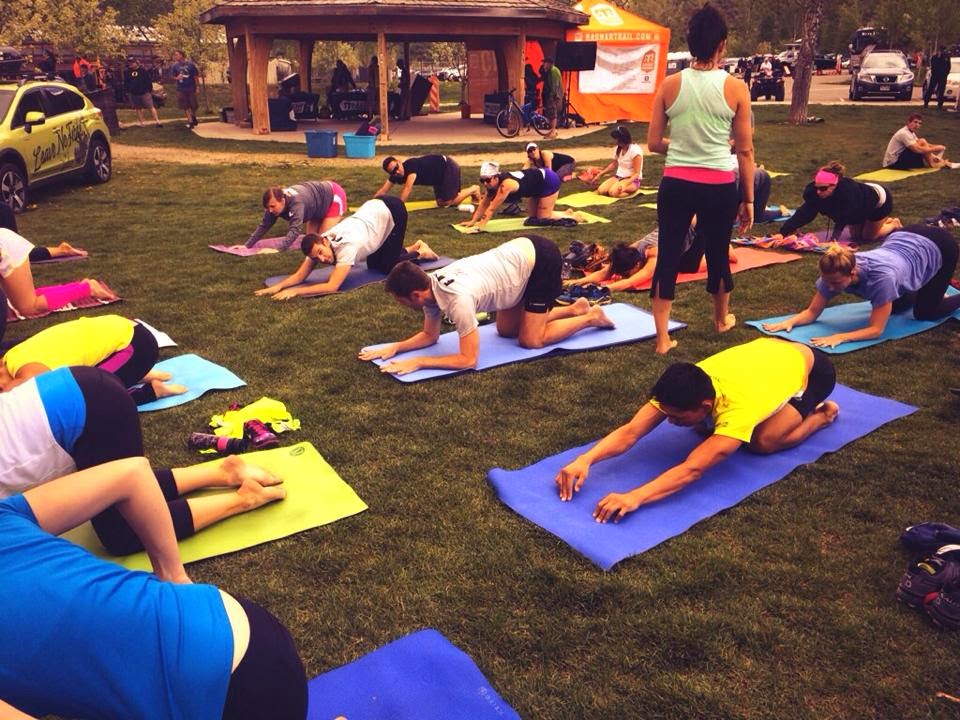 And then it was time to start! We had a brief 15 minute safety talk.  Including a warning about bears... and a heads up about a mama grouse attacking runners on the yellow loop! Our first runner stepped up with the fastest Ragnar teams... and we were off! 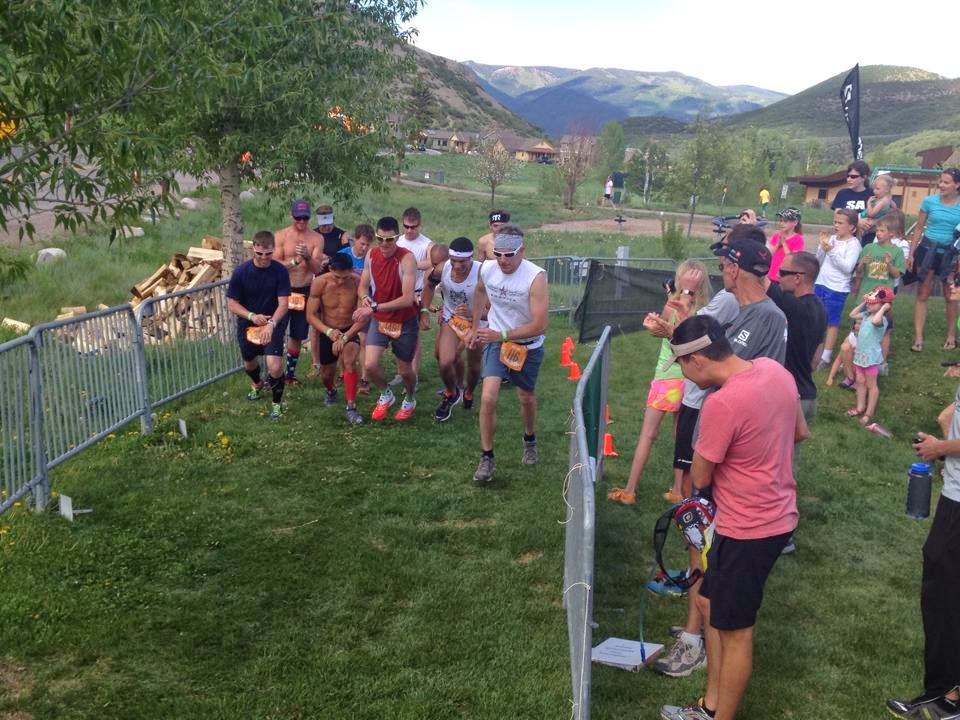