October 11, 2015
“Disclaimer: I received entry into The North Face Endurance Challenge Series to review as part of being a BibRave Pro. Learn more about becoming a BibRave Pro (ambassador), and check out BibRave.com to review find and write race reviews!”

I've yet to run a race that made the trails more welcoming than the North Face Endurance Challenge Series-Wisconsin. I met so many celebrities, was left inspired by the friends around me, and had an incredible adventure with memories to last a lifetime!

I was running the Marathon Relay with BibRave friend Julia and her boyfriend Dylan.  I had backed out of running my first 50k because of injury (more about that HERE), and was happy to at least experience the fun with all my other BibRave Pro buddies running. I arrived in Milwaukee on Thursday afternoon, ahead of the other Pros.  My hotel was actually in Delafield, closer to the race. A very small area, but had everything you could need.

My Sweat Tracker coach, Larry, arrived around the same time and we were able to grab a beer and grub at a local hot spot, the Water Street Brewery. Food and beer was pretty good. Convo great! Was awesome getting to meet my running coach in person. Plus, Larry was there to run his first 50-miler. Really helped add to the excitement. 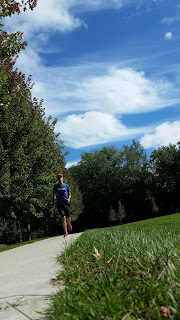 The next morning, I woke up and went for a run around the area. Felt good to get out and run-out some nervous pre-race jitters.

My hotel wasn't exactly bustling with ECSWI runners. But the other BibRave Pros were going to arrive that afternoon, so I ran a few errands (even got a haircut. lol).

I was still in my sweaty running clothes when I popped into a local Starbucks. As I was standing at the counter I spotted.... DEAN KARNAZES! 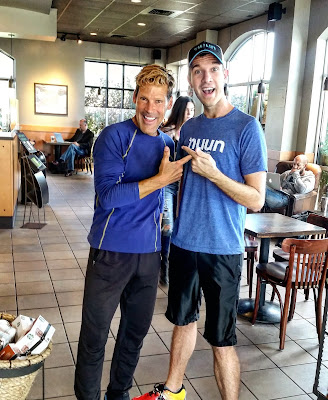 He's been one of my ultrarunning icons for over a decade now, and I was hoping to just get a glimpse of the guy... with little hopes for a photo.  When I spotted him sipping coffee at Starbucks, I had to go up and say hello.  Even was able to get a photo and everything. My trip could've ended there and I would have been happy. :-D 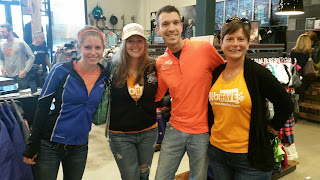 That afternoon, the other BibRave Pros began arriving one at a time. Although I'd never met any of them, it wasn't strange or awkward at all. We've all been online friends for some time now and we instantly fell into normal fun conversation and laughter.  We all met up at packet pickup the North Face store in Brookfield Square.

There was no "expo", just a virtual bag. But you did get 10% off at the North Face store. There were also several locations for packet pickup, as well as a race-day pickup option. However, there was a panel discussion with guest speakers at the Brookfield Square store.

The panel consisted of North Face athletes Dean Karnazes, Timothy Olson, and Dylan Bowman. As well as the race director, Nick Moore. We even got a shot with the race director before the panel started. The guy was super nice and down to earth. Turns out he even runs in Arizona often!

It was a packed house for the panel. But I'm glad we were there for it. I've attended panel discussions before, and I have to say this was one of the best! The race director didn't just give us a course overview. From weather to terrain, he really helped us understand what to expect on race day. 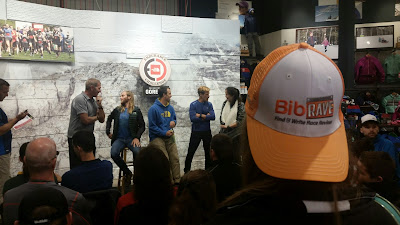 The panel moderator didn't just ask questions like "what kind of fuel do you use?"  Instead, he asked very interesting, specific questions directed at individual athletes and it really helped create informative, organic conversation from the athletes. I really enjoyed it!

After the discussion, it was time to carb-load! We stopped by a local pizza place and I ate more than I should have. And we had quite a few laughs over the table. The kind only good friends and good conversation can create. 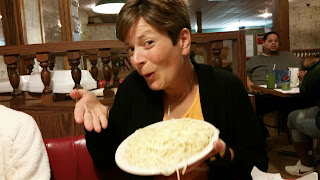 Afterwards, we headed back to the hotel to get some sleep... but ended up staying up way later than we should have. LOL. We got up super early the next morning to head to the starting line. 50 milers and 50k runners started hours before the marathon and marathon relay runners, but we wanted to cheer Pros Angie and Brad as they started their 50k.

There were only two "negative" things I'd have to say about this race, one of those being getting to the starting line. There was no address for where we were supposed to go, just a pinpoint on a map (even that didn't have the address). So it was a guessing game. We eventually found our way there but it was more difficult than it should have been. However, that's an easy fix so not a major issue.

The only other thing was the cold. It was overcast, windy, and in the low 50s. And being used Arizona weather, I was FREEZING! However, the race made as many accommodations as possible for us, including small fire pits to stay warm. The weather was actually perfect for running. When I was on the course it was amazing. Only when I was standing around did I get cold. So moral of the story is... bring plenty of layers!

Parking was great. For the amount of people there I thought we'd be hiking quite a ways in but it was only about a football field's length away, so not too bad in my opinion. And lots of park restroom facilities and porta potties.

At the start/finish and relay exchange area, there was water, coffee, bananas, bagels, etc. Pretty basic, but a lot more than you'd get at any road race starting line. Or at least, any that I've ran.

Before the marathon relay started, I got to met the founder of November Project, Brogan Graham! A really awesome experience. There were a few teams of November Project tribesmen there. And of course, they would all go on to finish in the top 3.

The marathon relay was broken up into four 10k legs. You literally went out and ran the 10k race course (that would take place the following day). We were in a marathon relay team of only 3 people, so I was running the first and last leg. So 20k all together. My first leg felt great. Weather was perfect for running.
The trail was not very technical but lots of rolling hills. More than I had expected but I powered through them. The cathedral of trees around me was breath taking. And the smell of the woods intoxicating. 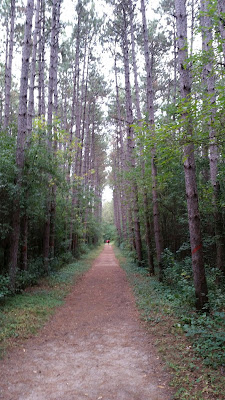 There were plenty of markings along the way, but since our trails were mixed in with the other courses, you had to pay attention. Each trail and distance had a specific color associated with it. And colored ribbons were tied to trees and bushes along the way. As long as you paid close attention when you came to a turn, it was super easy to follow. 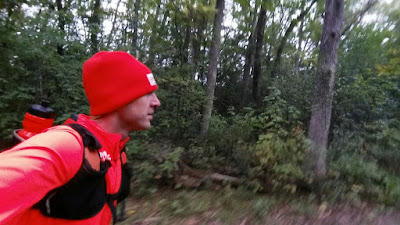 I went faster than I thought I would for my first leg, and was excited as I came into the exchange and saw Julia waiting. I guess... a little too excited. Because after being nimble on the trails. I TRIPPED over GRASS on the way into the exchange. I rolled my ankle too as I fell. But everyone said I was very graceful, catching my Orange Mud bottles mid air as the fell. So I guess I played it off pretty well. Thankfully, (or not so thankfully), Heather was there to catch it all on camera.

I had rolled my ankle enough to I was limping a bit. I was worried about it swelling up and keeping me from finishing! So I went straight to the medical tent and got some ice and ibuprofen. I only had the time it would take for Julia and Dylan to run a 10k before I was supposed to head back out! 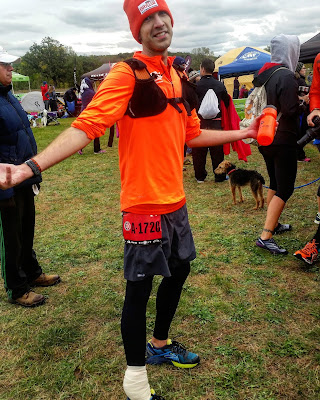 Fortunately, the ice helped and Dylan offered up an ankle brace he had with him in his car. Those two things helped keep things in check and allowed me to finish my final leg. I had to run slower b/c it still hurt, but was glad I was able to finish! 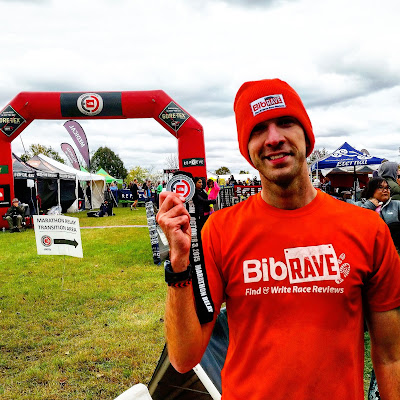 Overall our marathon relay team came in 6th. So that's not bad! It was also perfect timing because I finished, the rest of our BibRave Pros running that day also came in to finish. We were able to all share some hugs, high fives and beers.
After our beer, it was time for a nice warm shower... and more beer. We hit up Water Street Brewery again. 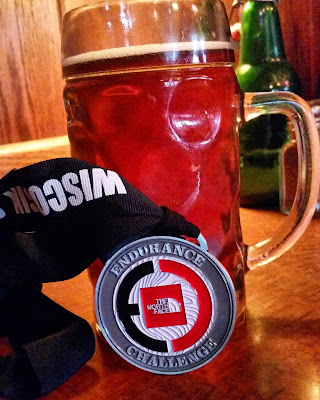 I met a lot of cool people at The North Face Endurance Challenge Series-Wisconsin, including a few "running celebrities". However, it was the BibRave Pro friends that left me feeling feeling inspired. From Heather and Laura staying with us ALL DAY on Saturday to just cheer, when she had to run the next day themselves... to Angie and Brad taking on the 50k.  They really motivated me to get my running back into gear. So when I got home I signed up for a 50k myself! (More on that later).

One of my favorite things about The North Face Endurance Challenge Series is they offer so many different distances so you and all your friends can get involved. I didn't run all of the different courses, however, you CAN read over a dozen reviews from this race from others on the varying distances at BibRave.com. They also have many different locations!

I highly recommend getting a group of your friends together and heading out for a North Face Endurance Challenge Series Adventure much like mine! You won't regret it! 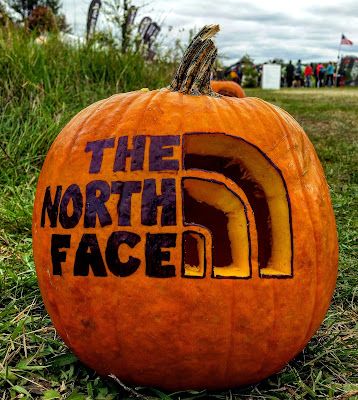