Now, as with any race and any charity, if you don't personally agree or approve of the charity, then you're welcome NOT to run it and then I suggest you not participate in the giveaway.  It's as simple as that! 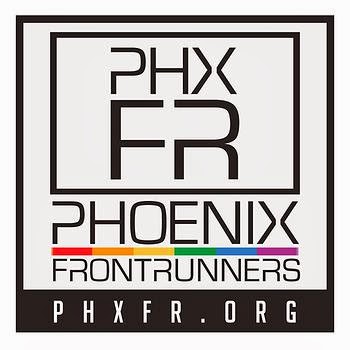 I will say this.  If it's the matter of feeling "uncomfortable" out on the course... let me ease those fears right now.  You won't be running amongst a bunch of guys running in dresses or practically naked.  I run regularly with the majority of those running this race, and let me tell you, they take running ANY race seriously and will be doing their best to set a new record!  There's no time for dresses or heels when there's a PR to be had! LOL.

Also, a large percentage of the participants already signed up are straight and just want to support a good cause, so again, you have nothing to worry about if your straight! If you're a part of the LGBT community... then you've got some tough competition!  Now, on to the race itself!

The course takes place in the heart of central phoenix, right where the Pride festival and all the action will be taking place! It travels up Central Avenue, down 7th street, and uses a portion of the parade route.  You enter into Indian Steel Park and end back where you started.  An easy, FLAT, loop course.  For those running the 10K, you simply run the loop twice.

I've been out and followed this course, it's as flat as they come and super fast.  So if you're looking to PR, you should give this one a shot!  It is USATF certified and will be professionally timed.


Plus, they've got some pretty cool medals and an awesome backdrop to take you photo on.  There will be food vendors at the finish line as well.  It's going to be a really great event! 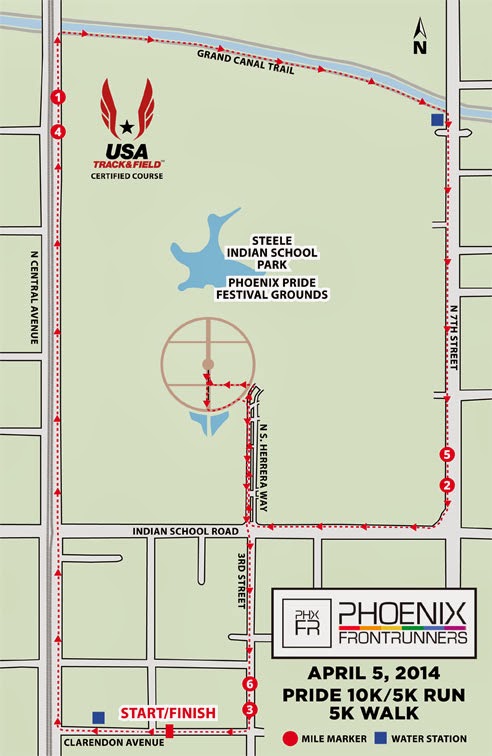 If you don't want to wait to see if you win the free entry, you can sign up now with the Promo Code: PHXFR5 for $5 off.  Or you can watch the video on their website for the $5 Promo Code.  http://www.phxfr.org  Right now it's only $45 to sign up, and that's not including the discount codes!

Okay okay, on to the Giveaway!  All you have to do is enter through the Rafflecopter gadget below.  It'll ask you to follow Phoenix Frontrunners on FB and Twitter, and that's it. Super easy!  If you've already signed up, share the giveaway with a friend so maybe they can run with you!  You have until March 30th at noon to enter to win. I'll announce the winner of the Free Race Entry on March 31st.  Hope to see some new faces out there this year!  Can't wait and Good Luck!

**UPDATE** I've found out they're also rewarding runners with the craziest, wildest, and most colorful running attire with some awesome prizes.  So be sure to wear something FUN and of course, have fun doing it!

Confessions of a Social Media Influencer 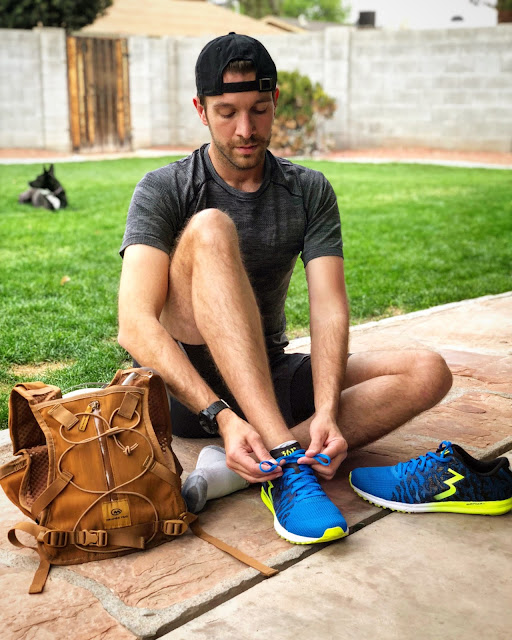 How can I get free stuff? How do I get to be an ambassador for something? I get TONS of questions about being a "social media influencer". From product reviews to ambassadorships. So I want to answer some of those questions in order to help others and also to give some perspective on just what exactly it means to be a social media "influencer."
Read more