February 17, 2014
As I runner I meet so many people on my adventures.  Whether it's a 5K or a Marathon, there's always someone with an amazing story.  It's from those runners that I've met that I draw a lot of inspiration from.
The one that stands out the most to me was about ten years ago.  I volunteered at the Arkansas Traveller 100.  An ultra-marathon through the Ouachita National Forest... close to my hometown.  I've always been interested in running an Ultra and this experience is what made me want to run a 100-miler in the near future.
I was stationed at one of the mid-way checkpoints, at about mile 45 and around 75 (it was a loop course).  We'd hand food, drinks, grab bags, etc to the runners as they came through, and weigh them to make sure they hadn't lost too much weight.
There were only about 100 participants in this grueling race and I was told only two-thirds would actually finish.  Our checkpoint was also a spot where runners could stop and be shuttled back if they were too injured, etc to keep going.  Seeing the different racers and their struggles really gave me a new perspective on ultra-racing.
Some runners asked for a fill up on water and maybe a handful of pretzels.  Others requested soup.. or even soda.   We had it all there for them and tried to patch em up, fill em up, and send them off with a cheerful "Good Luck!"

A few runners had friends/family to pace them for a bit to help take the mind off what was obviously a painful challenge.  One younger woman came through looking as pale as a ghost and wanted soup, and a place to sit.  Her boyfriend was there to console her, and she was debating on dropping out.  The boyfriend had been injured and couldn't run, and was unable to pace her.
So I offered to pace her to the next checkpoint.  I had my running shoes with me, so I grabbed em, borrowed a headlight from someone since it was getting dark, and headed out right along side her.  Unfortunately, I cannot remember her name.  But I *do* remember her story!
﻿﻿﻿﻿﻿﻿﻿    We were running along at a decent pace but not too fast.  She said she was having trouble holding anything down and proved it to me later when she had to pull off to the side of the trail and throw up.  We made idle chi-chat for a few miles and I asked her questions about her experience running ultras.
This was her third time running the AR Traveller 100.  The first time she'd finished, the second time she'd dropped out.  She was back with hopes to redeem herself but was worried because it wasn't looking good.
I'd always heard about ultra marathoners seeing hallucinations and wondered if that was true.  She said, "Oh yeah.  I always see bright purple spiders.  The first time I saw one skittering across the road it scared me to death.  I'll see them on trees too."
She trudged on and we made it to the next checkpoint with her only throwing up twice.  I ran back on my own and it was night now so I had to use my headlight.  The moon was bright and the sky shined with stars and was the perfect time to reflect on the amazing person I'd just met. 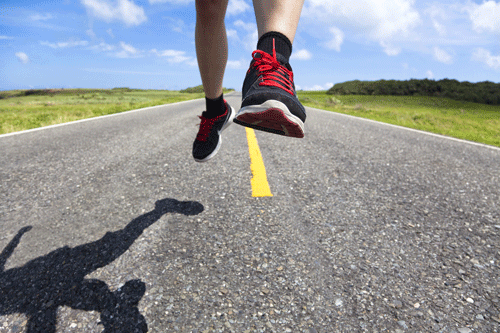 100 miles is no joke.  She was in pain and I could see it. But I could also see her determination.  When other's would have turned around long ago... she was still going.   Now when I run a marathon and I'm hurting at Mile 23 and wanting to walk... I think back at that night and push myself a little further.
There are many more runners with amazing stories out there and I continue on my racing adventures eager to meet each and every one.  And this time, I promise to remember their names!