Running from Injury: The Cortisone Confessions

July 24, 2014
So one week out from The San Francisco Marathon, and I was feeling good. Was doing everything right... and getting excited. Until Monday I woke up and could barely put pressure on my heel. Plantar Fasciitis had struck... with a vengeance! Apparently my foot had had quite enough and was fed up. (Here's a great article on PLANTAR FASCIITIS for more detail on this injury)
I iced my foot, stretched it, took plenty of ibuprofen... It was getting "tolerable" but I could tell there was no way it was going to be Marathon-ready in just five days. So I weighed my options. If my race were local, I'd resort to just cheering from the sidelines. But I've been eagerly waiting for this race for the past YEAR! Running across the Golden Gate Bridge has always been on my bucket list, and this was supposed to be my "fun" marathon of 2014!
Friends had told me about getting a Cortisone shot. I'd never gotten one.. and was even more concerned that most of those who'd received the shot...had a few weeks to recover before their race. I had DAYS... not weeks! But I decided something had to be done.
What is a Cortisone injection? It's basically steroids to help with the inflammation and speed up recovery. But they advice to accompany it with REST... not 26.2 miles. I'm not planning on PRing at this marathon.
I just want to go, enjoy the scenery, and FINISH. I've put in long hours, long miles, sacrificed weekends, and endured some intense desert heat all to get to that finish line. And I'm stubborn. But I'm also not dumb... so if I start hurting during the race and it's unbearable, I'll be the bigger man and admit defeat. So I went to local sports medicine office. 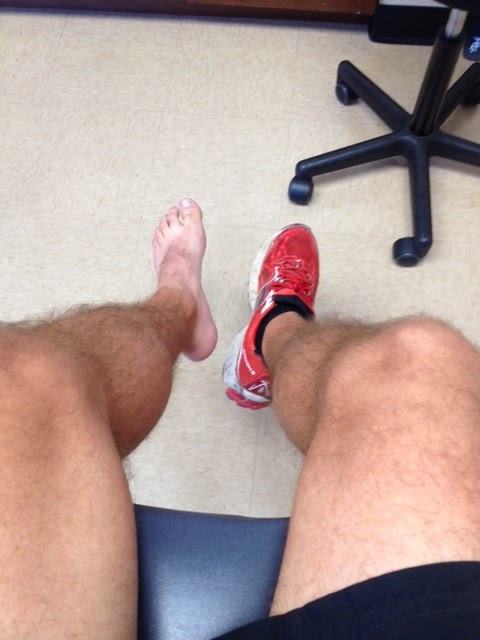 Everyone was nice... and both patients and staff were super fit! Much different from the normal doctor's office I'm used to. They took some X-rays, "just to be sure". The doctor was great. Most would immediately say "don't run". And runners refuse to except that diagnosis. Thankfully, he understood.
He explained there ARE risks involved with getting a cortisone injection. The scariest risk? Cortisone can weaken the tendon, and lead to rupture! Of course, it doesn't happen with everyone... and the chances are usually about 1-100. But it's still a scary risk that I had to weigh before agreeing to get it.
Now, most of my friends told me that this shot HURTS. Not to mention I'm already afraid of needles. So I was pretty worked up when it was time for them to give me the shot. Based on second-hand stories...I was expecting intense pain and I knew I was bound to cry like a baby.
However, it didn't hurt any more than getting a shot at the dentist. It stung... but they put a little numbing solution in it so it didn't hurt forever. The doctor also used an ultrasound to get the cortisone right into the "sweet spot". 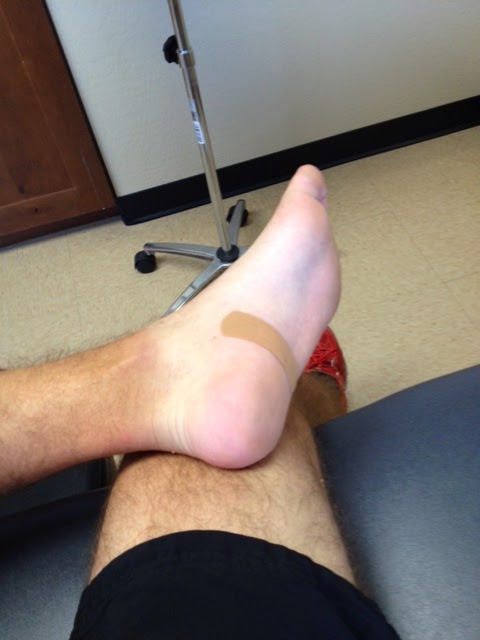 There was no immediate relief, and it's been 24 hours since the shot. My foot STILL hurts. It's stiff and bruised... very much like when you get an injection in your muscle for a flu shot, etc. I'm trying not to worry about that TOO much, because the doctor said it takes a day or two before it will start feeling better.

Will this be the "quick fix" I need to finish my marathon? Will it hurt half-way through and I be forced to drop out? Will I make it to that coveted finish line and triumphantly wear my medal? I don't know. It's all I can think about right now. And I can only hope luck is with me this weekend. I leave tomorrow so wish me luck!! 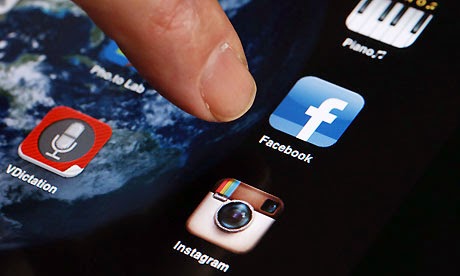 I will update you all on how the race goes. I hope the next post will contain that victorious finish photo and an awesome Gold Gate Bridge selfie! :)  I'll be posting as I go, from my run with Bart Yasso to the race itself via Twitter (@runblogaz) and Instagram (@runner_blogger_az) so make sure you're following me!

UPDATE: <--- Here's how the foot held up on the race and my experience/opinion on whether or not the cortisone shots work.
Confessions Cortisone shot days before race marathon training plantar fasciitis risks running injury the san francisco marathon