December 28, 2014
I have a confession: I'm obsessed with Almond Butter.  My pantry is stacked with jars, packets, and cases of the stuff.  So how does Justin's brand stack up to the rest?  I put it to the test! 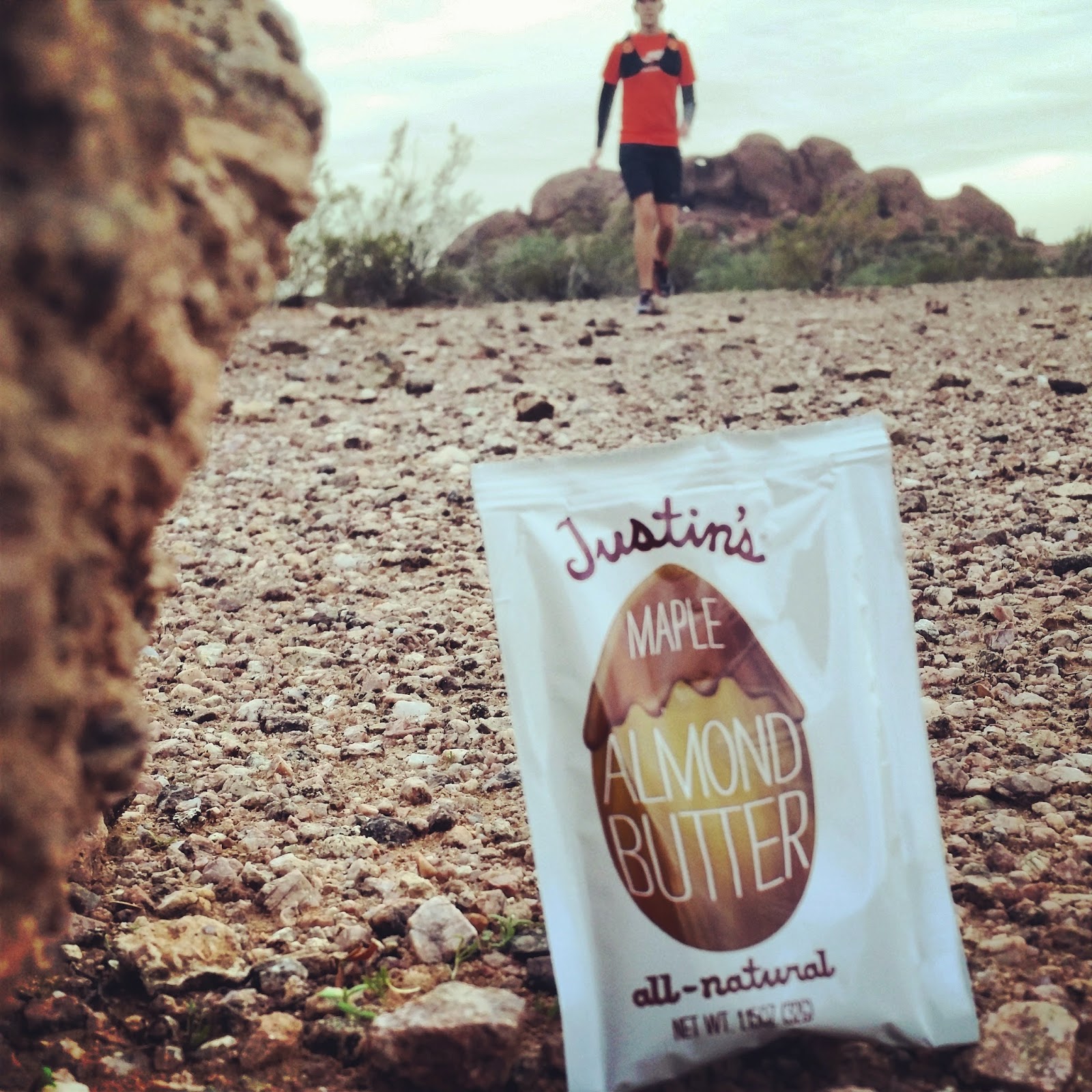 Disclaimer: I received a case of Justin's almond butter thanks to Bibrave's BibRavePRO ambassadorship program. You can learn more about becoming a BibRavePRO & check out BibRave.com to find and write race reviews. All opinions are my own. 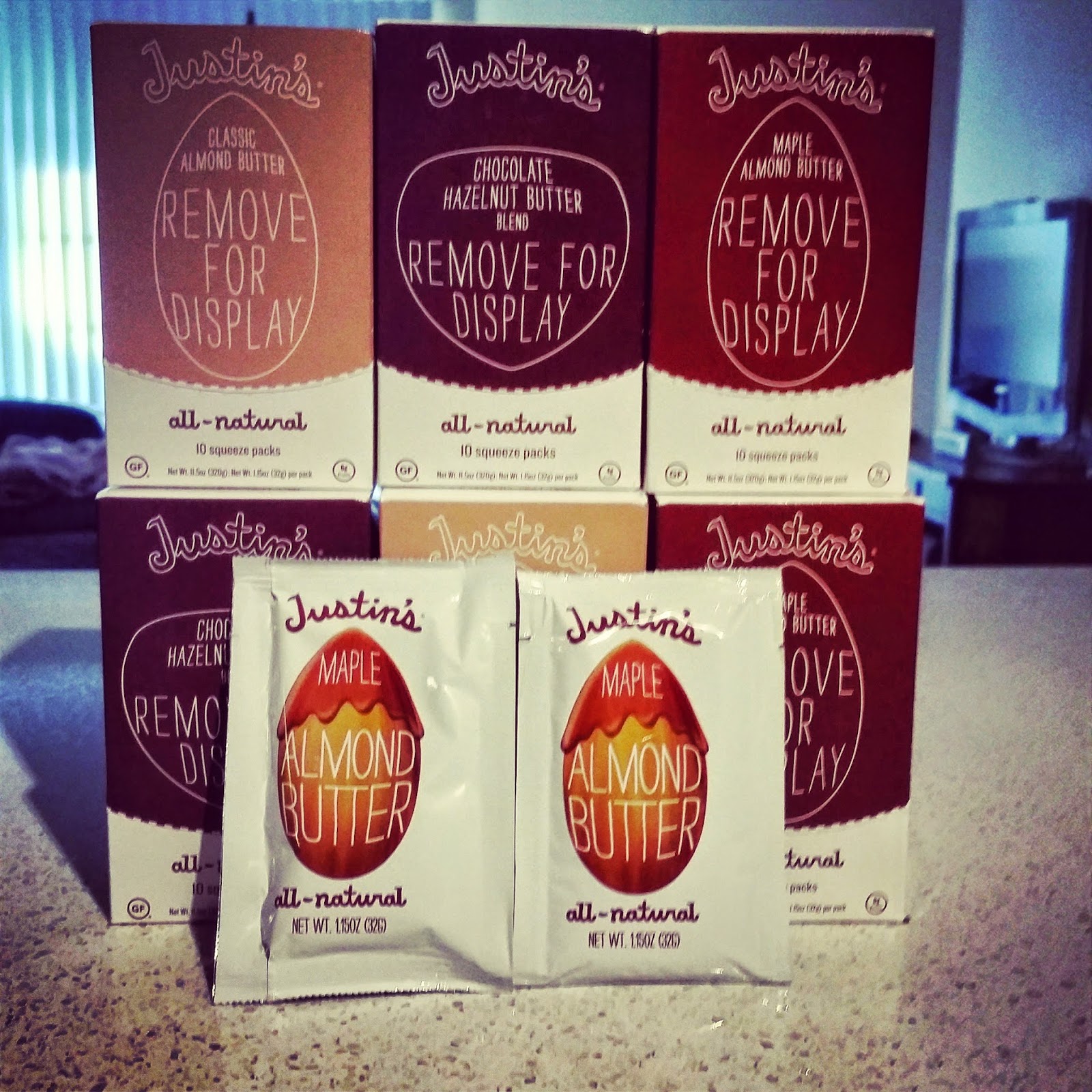 Thanks to BibRave, I received a case of 1.15oz packets of Justin's almond butter. I got to try three flavors: classic, maple, and chocolate hazelnut! And although I immediately knew I would love them all, I wanted to put them to the full "fuel" test.

PRE-RUN
One of my favorite pre-run breakfast meals is almond butter on toast.  Quick, simple and delicious! I like a lot of almond butter on my toast.  So it took about one packet per piece of bread.  May sound like a lot to some, but I *did* mention that I was obsessed, didn't I?! 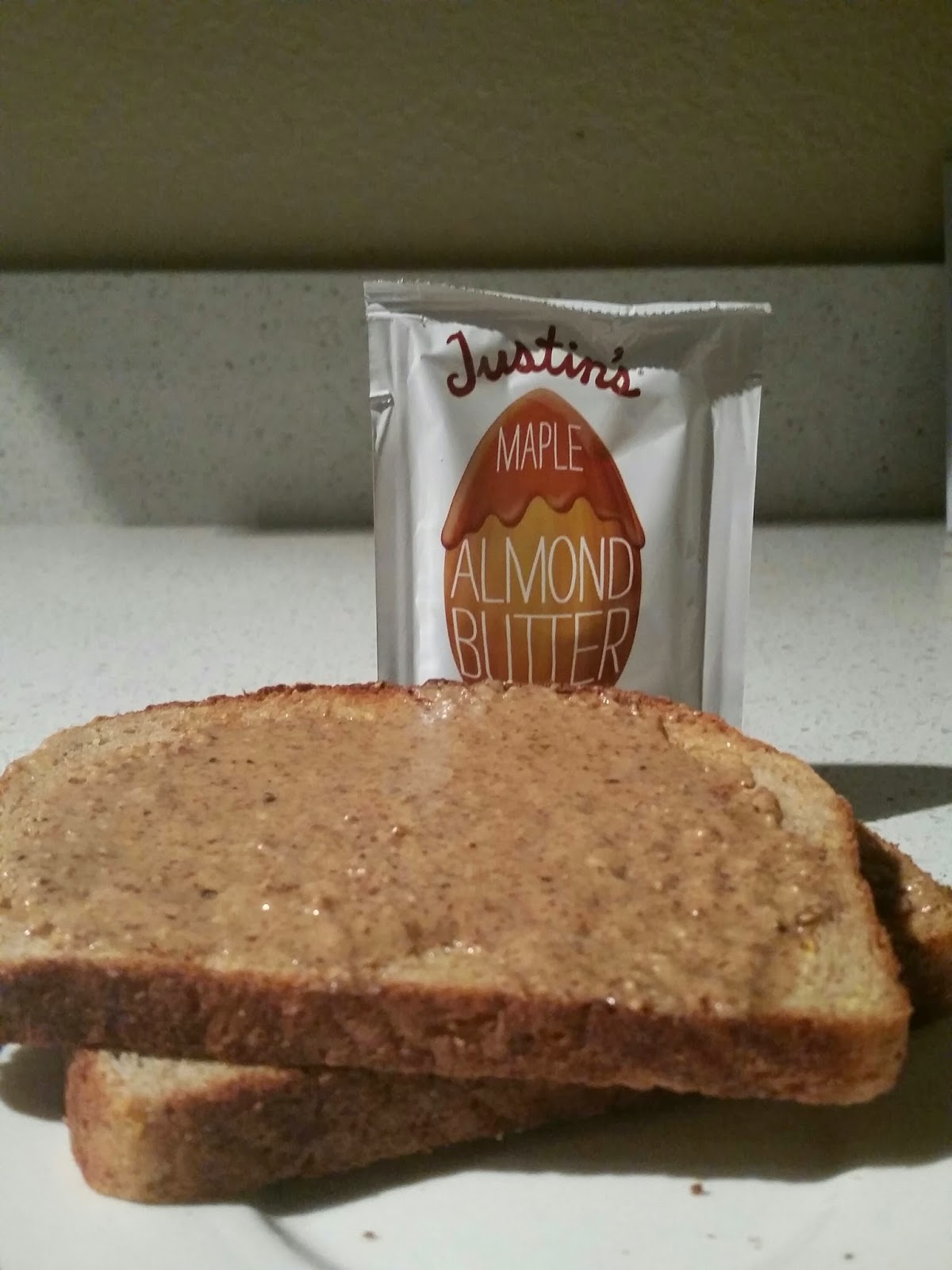 The verdict? Perfection! Especially the maple almond butter... gave it an added sweet flavor and hit the spot right before a morning run.  Enough to get me going but not too much to leave me too full to run.  Five starts for post-run fuel!

Race Fuel
Justin's was great before a run, but how about during? I wanted to give it a shot as a gel alternative, something that would sit easier on my stomach,  So I took a packet with me to the Hot Chocolate 15K-PHX. 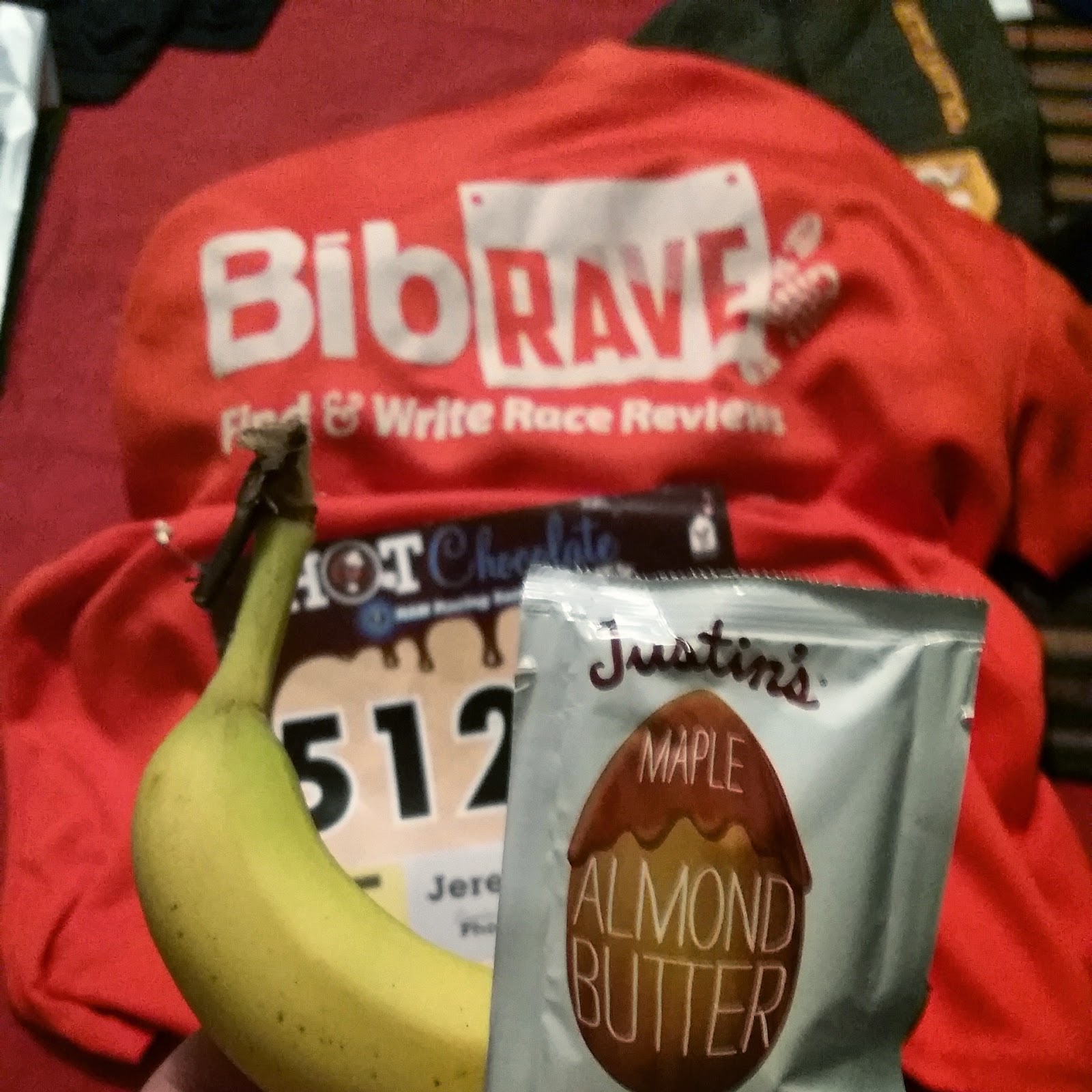 The packet was easy enough to open up and squeeze everything out while on the run, but it didn't quite go down as well as I'd hoped. I needed a bunch of water to wash it down because, well, I had a mouth full of almond butter!
Unfortunately, I wouldn't suggest the Justin's Almond Butter for a gel alternative during a road race.  However, I did try again during a trail run, where I could stop and walk while eating, and it went down much easier.  So if you're able to stop while you eat, it can definitely be used as a gel alternative.

POST RUN
What could be better than a post-run sandwich with almond butter and banana? I for one suffer from being "run-gry" the rest of the day after a good long run.  But eating something like almond butter helps me curb my sensational appetite while still eating enough to recover properly.
Justin's gets five stars for a post-run treat! 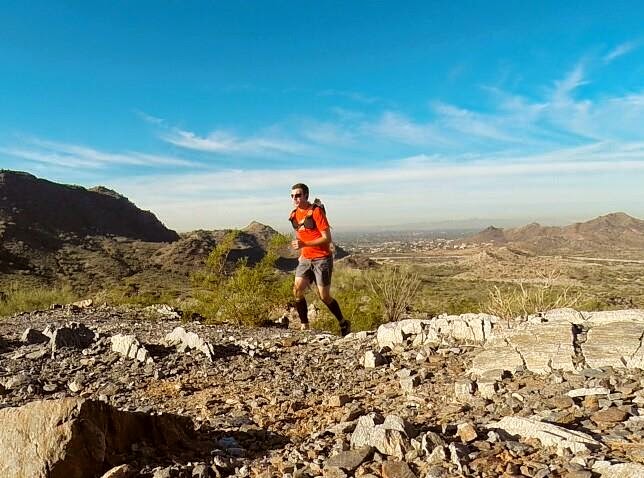 Justin's can be found at some of your local grocery stores (click HERE to search locations near you) or online.  Packets are cheaper if you buy in bulk. You can get a whole box of 10 packets for about $12 on amazon. If you prefer to just use a jar, I believe they are cheaper in-store than online.

There are also several other flavors available, including vanilla! And Justin's has some great recipe ideas on their site as well.

All in all I highly recommend Justin's almond butter.  Even My two pups give Justin's their seal of approval! 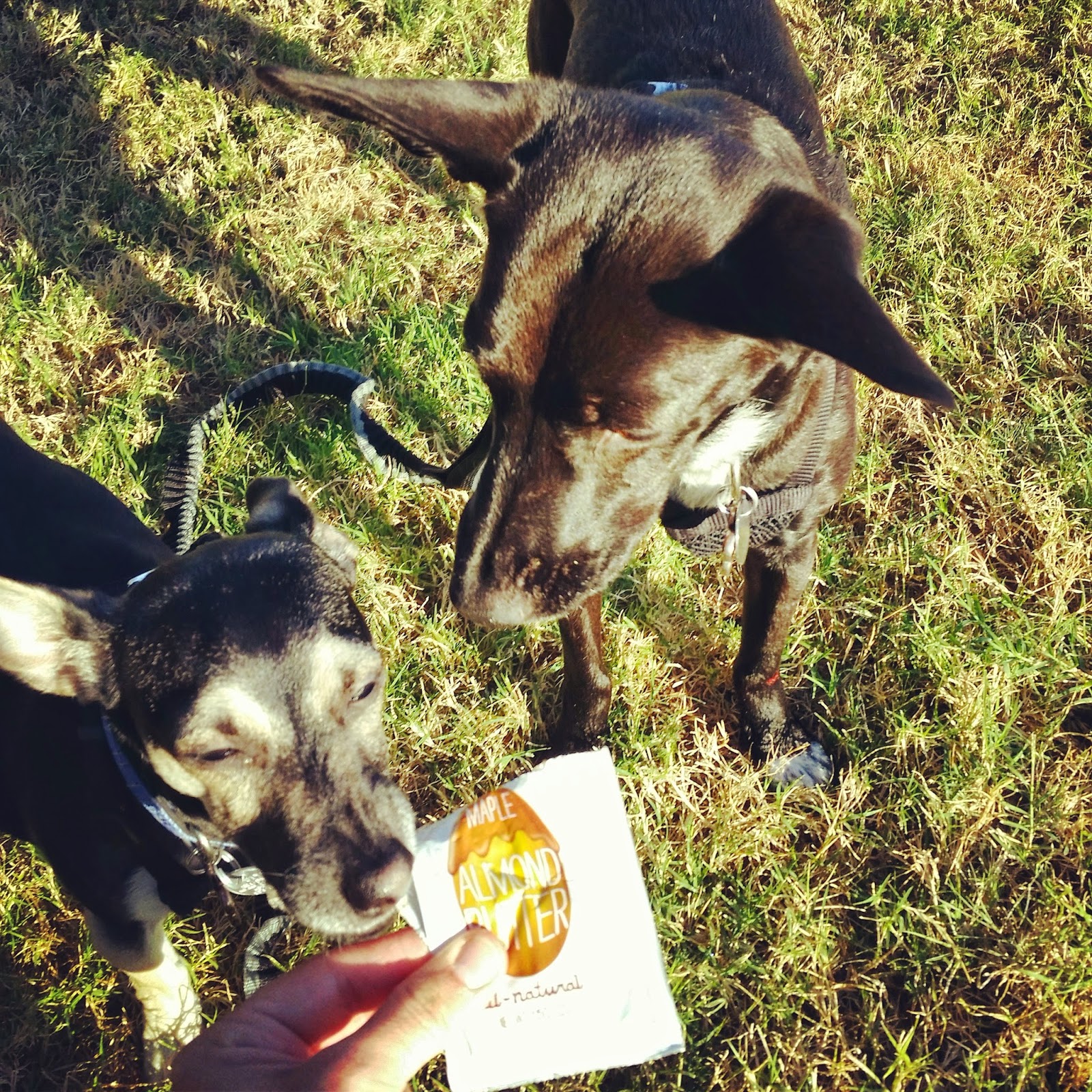 Do YOU use Justin's or ever wanted to try it? How do you/would you use it in your daily routine?